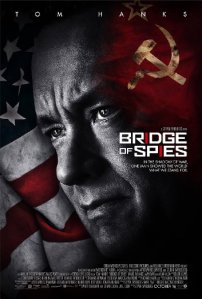 Bridge of Spies is, by most measures, a solid piece of awards season bait. Classically made, told, performed. It’s a good movie, and one that is also a labor. Just how long can audiences sit still and watch a whole lotta talking for the sake of talking? The answer surely isn’t the film’s running length, which stands at two hours and twenty minutes, most of which you feel. Steven Spielberg’s latest falls into the classification that I call paper weight movies. Ornate and heavy, resting upon a fat stack of richly detailed information which it intends to share regardless of our level of interest. Bridge of Spies has the resume of an Oscar heavyweight with the acumen and glass chin of a welterweight. For some filmmakers this would be excellent work, but from Spielberg, one of the all time greats, it ends up being a viaduct and a filler between his last great movie to the next. 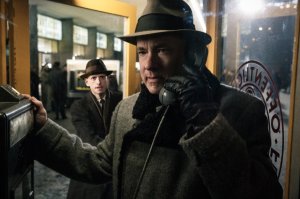 While technically a Cold War espionage thriller, Bridge of Spies is rather light on consequences, somewhat undermining the gravity of its own 1957 politics and overstaffing the world it builds for us on-screen. Its chief concern is morality, and the man campaigning for the cause is James Donovan (Tom Hanks). As an insurance lawyer, leading negotiations between countries is not in his ball park. But Donovan, a man of iron-willed fortitude, doesn’t shy away from what is asked of him. Hanks has been showered with praise for this role, yet to bunch it with the rest of this year’s outstanding male leads or even the rest of his own career is poor rationale. Donovan is a one-note character. He’s the embodiment of American ideals and values, and rarely – or at all – does Hanks get to challenge himself here. Tom Hanks is our Jimmy Stewart, opting to rely on his virtuoso talent and universal likability rather than the latter’s goofy everyman qualities. Hanks is an actor who you look up to. Stewart was one, despite his height, who you saw eye to eye. I should note that this isn’t a critique of his work here. It’s just hard to compare this to the rest of his cannon because he is allowed to imbue so little into the character. 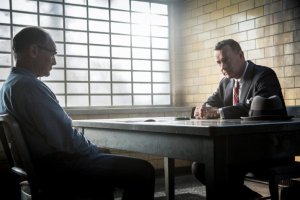 The real reason to see the film is to discover the largely unheralded Mark Rylance. He’s Rudolf Abel, a Soviet Union spy who spends his days painting and smoking, out in the park or in his dingy Brooklyn apartment. Rylance has the look of one of those sad porcelain clowns. Dreary eyes, creased cheeks, corners wrung down at the edges of his mouth. Bridge of Spies criminally underutilizes him in a script that is at once tight before it becomes loose. However, unlike most war movies, this really puts the enemy on display and even dares to compare them to us, to our own. Abel may be a foreign spy, but he is a good one. He doesn’t sacrifice plans or leak secrets in exchange for money or promised safety. If he was American he would make us proud. Whether we like it or not, or are even aware of it, our patriots and our enemies have shared bodies with different faces who bleed various national colors. We get to see how Abel is treated here, how he is treated there, and how Donovan blocks out either side’s patronage to simply know the man as a human being. 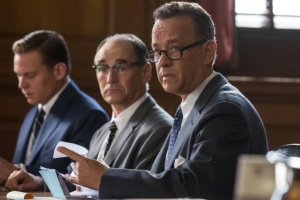 It’s clear and even said over the course of the movie that, “Every person matters.” That’s Donovan’s defense of Abel, and one that is timely as ever. Bridge of Spies surprisingly translates to and comments on current worldwide disputes even with the near 60 year gap between then and now. The Berlin Wall is a glimpse into what our own border conflicts with Mexico could possibly hold. The earlier quote rings true in the recent deaths of minorities, an all-encompassing take on “Black lives matter.” History is the same record merely played to the tune of the times. The script gets lost in its second half though, forgetting the opening’s relationship established between Donovan and Abel in order to have figures, in this true events case a shot down American pilot and a graduate student, to compare to Abel. And Spielberg does his best here. This movie should feel stale, but carefully watch the camera. It’s constantly and relentlessly on the move with important scenes of discussion rarely using more than four different shots. Bridge of Spies is one of the finest made and most applicable films of the year, and sadly it is one of the most boring.

“It doesn’t matter what people think. You know what you did.”