“If anyone can do it you can.”

Most hear the word Everest and immediately think of the apex. The freezing, windswept, snowcapped summit of the highest point on the planet. How, and why, would anyone ever want to go there? Everest answers that question in a glacial way, with the slow pace and unseen majority of the ice mountain looming beneath the surface. We see the pilgrimage to Tibet, the stops at monasteries, all of the different zones and camps leading up to the world’s highest peak. Like a glacier, there is so much more beneath the surface than we ever know or ever glimpse. Everest may not be a great film, strangely divided into two separate and fragmented parts, but it’s informative, and the end result is a worthwhile yet lackluster tribute. 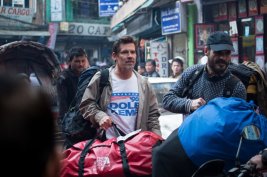 There is large cast here, so for sake of length I’ll only mention the main characters. Based on real events, Everest, for the most part, is the story of Rob Hall (Jason Clarke). He’s the owner and expedition leader of Adventure Consultants, a company specializing in the extreme trek to the pinnacle of the world’s tallest mountain. It’s a $65,000 trip, and one that Rob only allows the most experienced climbers to participate in. Those include rich Texan Beck Weathers (Josh Brolin), everyday mailman Doug Hansen (John Hawkes), and well-known author Jon Krakauer (Michael Kelly). The group has many personalities and faces but these are the most emotionally invested of the bunch. Rob hopes for an another successful ascent and to make it home in time for the birth of his child with his wife Jan (Keira Knightley). Everest spares none of the harsh realities in the battle against Mother Nature.

As one expels incalculable amounts of energy making this climb, so does this story trying to cram everything in. At one point another expedition leader named Scott Fischer (Jake Gyllenhaal) tells his group to pack light, because at the top one pound feels more like ten. And so does the stapled on emotional baggage of the film, so many characters who pop out of nowhere or disappear without a trace of accentuation. There is an earned sentiment between Rob and Jan, one exposed to the elements and fighting to stay alive while the other shields that same gift within her womb. Their interactions countless miles apart really work because of the strong performances from Clarke and Knightley. He proves to be a reliable talent while she shows us, as always, that few do the dramatic cry better than her. But in these blizzard like conditions with a story that starts as a comfortable igloo and eventually collapses in on itself, the drama is lost to spectacle.

That’s not so much a critique as it is commentary though, because that can be impossible to pull off, especially with a film of such grandeur and scale. Baltasar Kormákur brings a sense of realism to the picture. We can always tell which shots are on location and which ones are sets. The congruity comes from his ability to blur the lines. However, I was unimpressed by the use of IMAX. A survival story in one of the most dangerous locations on the globe should be feel epic. Most of the time though it is plodding, shuffling through snow and waiting a turn to climb. Everest surprisingly lacks much action, placing its focus on being a literal tall tale, but mixes the two tones together in a way that is all too dreary at times. The moments on top of the world don’t pack a punch because we know we must climb down. And that proves to be a deathly, isolating journey. Everest fittingly walks through the valley of death, and when it comes out on the other side, shrugs with indifference.

“The last word always belongs to the mountain.”