Multiple times over the course of Terminator Genisys, the terminator reprised by Arnold Schwarzenegger uses the word “theoretical.” That, theoretically, their plan to stop doomsday could actually work. However, as an audience member, we can all say, definitively, that this movie is not good. There’s no need for theory here. Cinema has taught us that toying with time is never a good idea, and that it can create unforeseen complications. Terminator Genisys doesn’t tarnish the first two entries in this failed franchise, but it sure does discredit and mar their legacies. Some stories can go on forever. Except Terminator shouldn’t.

I could not tell you the timeline of this movie even if I tried. That’s because while the setting is crucial to the time travel aspect of the story, the location never resonates. So just remember that San Francisco is getting destroyed (for the umpteenth time this summer) and Skynet, the overthrowing of the human race by the machines, is in full effect. The resistance is led by John Connor (Jason Clarke). He’s nearly omniscient, treated like a prophet, knowing exactly what to do and where to be in order to ensure the defeat of the machines by the hands of the dwindling rebel human race. By his side is Kyle Reese (Jai Courtney), his most trusted soldier and friend. Reese volunteers in his call of duty to go back in time, to warn Connor’s mother Sarah of the imminent threats on her life, and as anyone who has seen the other films before knows, it’s a way of securing his own future. Terminator Genisys, at least to start, is not a bad action film. 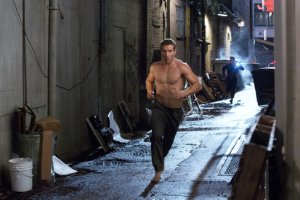 The majority of the film is spent with the same core unit. There’s Reese, Sarah (this time played by Emilia Clarke), and Pops (Schwarzenegger). I still don’t get Pops’ name, since that’s his title throughout but is still for some reason credited as guardian. Never mind that though. It’s clear that Genisys is meant to acknowledge the previous two duds in the series while also completely disregarding the results of their actions. This, more than any, is the followup to the incredible Terminator 2: Judgement Day. The problem lies in the cold and honest fact that this film is so much worse than what came before. It is less grounded, less balanced, less steeped in small and quiet character developments. Genisys, directed by Alan Taylor, is not a poorly configured tentpole. Still, it’s more like an awning without the proper or suitable frameworks. The tent can only have so much plot piled up on top before it gives way. 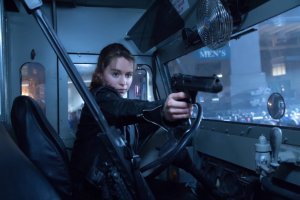 The biggest problem here is the choice of Clarke and Courtney in the leading female and male roles. Clarke is plain miscast as Sarah Connor. Her stilted dialogue is forced, mostly because the writing is so poor and on the nose, and I just don’t buy her as an action star. It felt like watching Shailene Woodley in the Divergent series. Both actresses are bubbly and dramatically gifted, but their talents don’t translate well to the blockbuster brand. Worse off is Jai Courtney, up there with Liam Hemsworth as the least skilled actors getting the most work today. He’s big and brawn and believable in his many adrenaline fueled scenes, yet he has little flair for the dramatics. His performance and the romance with Sarah suffers because of his acting, resulting in completely non-existent screen chemistry. They have zero compatibility. 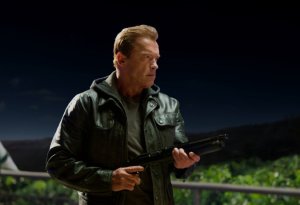 Terminator Genisys gets two solid performances despite the frequent bumps. One comes from Jason Clarke as the stoic and staunch adult edition of John Connor. And the second comes from Arnie, of whom it’s a pleasure to see back in this landscape, even if this time around his character overbearingly toes the line between human and machine. However, the tepid box office numbers indicate that so far audiences just don’t care about the Terminator series anymore. That’s because all the doomsday hints and cross cuts through time can’t cover-up the journey’s inevitable sense of finality. The movie actually has a good start which is squandered away for cataclysmic bus chases and extended chopper combat. But what critics and audiences seem to agree on, and that not even a good film can mask, are the egregious continuity errors and obvious gaps in logic and reason. I’m all for good dumb fun, so long as the good isn’t absent. Unfortunately, or maybe for us thankfully, Terminator Genisys could prove to be its own undoing…its own Skynet…its own doomsday.

“You are nothing but a relic to a deleted timeline.”