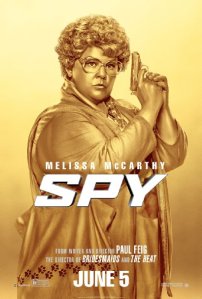 “I would accept that with an open mouth.”

Spy is a brilliantly stupid movie, weaving together a story of Peter Sellers type farcical exaggeration and equal parts action driven set pieces. That’s both why it works and why it doesn’t. It’s funny like a token stoner, it’s jump worthy enough for an adrenaline junkie, and it streamlines its action like a lush downing a shot of crappy tequila. The thing is, like that deathly dumbing trifecta, the results are tonally inconsistent, and the end product feels entirely incomplete. We go from inventive operational sequences to full-blown expletive filled sailor rants. It’s part PG, part rated R, and even a bit NSFW. So when the ab day laughs come along, which are frequently interruptive yet also entirely welcome, you start to feel unsure of when to laugh. True to most of director Paul Feig’s films, it suffers from a dedication to the comedic genre, exchanging funny situations for easy ad-lib and unfulfilled and unnecessary drama. Still, Spy is a borderline genius mock of the spy genre/procedurals that stands above the rest of the imitators.

For all of its well-worn plantar’s warts, Spy excels in its most minimalist moments. From the intimacy of one on one conversations to the remarkable opening riff on Adele’s Oscar-winning track for the most recent James Bond film, the movie simply exudes smarts. It knows the genres, both action and spy, and pits them against one another while only briefly sacrificing the comedy it set out to be. Herein lies the problem and maybe even the success. Feig knows what he is doing. So does Melissa McMarthy as his lead Susan Cooper, a reconnaissance CIA operative who’s also a part-time cake boss. Spy is hilarious and dull, exciting and boring. Why don’t filmmakers realize comedies shouldn’t ever be longer than 1 hour and 45 minutes at most? Dramas can be long and arduous because it is inherently easy to be sad. Laughing takes effort and energy, and after the full 2 hours I simply didn’t want to laugh anymore.

McCarthy stars as Cooper, the desk-ridden voice in the ear of field agent Bradley Fine (Jude Law). She graduated top of her class yet her reticence and guidance counselor skills through a head-set make her invaluable behind the scenes. Spy is a film divided on the sexes, almost to a fault. Cooper and her fellow women are incredibly smart while the males are one-trait proponents of sex, violence, or utter disregard. The stereotypes are not wrong, nor entirely right, but for a movie written about and heralded for such a strong and communicative female lead I felt a bit disowned by the overwhelming old-fashioned portrayals of modern men. I understand that this is comedy, that it’s built to be a spoof, but no male character is redemptive. It’s a disengaging balance, and I fear the opening box office totals are a reflection of the film’s inability to connect with a male audience despite the uniform critical praise. 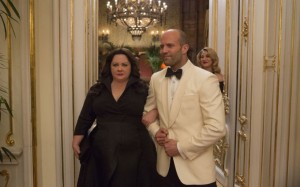 Cooper’s dreams become reality after all of the CIA agents’ identities are revealed by Rayna Boyanov (Rose Byrne). She’s working a deal to sell a nuclear bomb and Cooper volunteers for a strictly track and report mission. Circumstances drive her deeper and deeper, and it showcases McCarthy’s physicality, reminiscent of the late Chris Farley, and highlights the intelligent crudeness she’s become known for. Byrne is entirely believable as the catty and bitchy heiress. Miranda Hart, as Cooper’s friend/co-worker Nancy, plays both doofus and wisecrack with ease. Laughs come a plenty from Peter Seratinowicz as Aldo, a hysterical exaggeration of a horny Italian stud. And Jason Statham shows he can handle the comedy genre as fellow agent Rick Ford. He’s airheaded, vapid, and mission obsessed. Statham hasn’t done anything like this before and his comedic scenes are some of Spy’s more memorable moments. 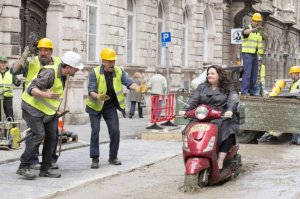 Many of Melissa McCarthy’s movies are pointless pieces of bombastic behavior, but Spy’s material – for the most part – rises to the occasion. She recently got a star on the Hollywood Walk of Fame, although after one weight-shaming TV Show and 6 well-known film roles I’d say it was unmerited. Regardless, she’s one of the funniest women working today, and in last year’s St. Vincent  she showed us that she can handle drama as well. Here she adds action to her resume, as Paul Feig skillfully handles a fight sequence here and a chase scene there (although the car chases need major work). The movie is set up for a sequel, and should they go forward I only hope they make a clearer distinction between what they are trying to accomplish as far as genre goes. Spy resembles a complex espionage trinket. It does this, that, and everything Inspector Gadget could fit into his wardrobe. They’re all there, but none of the components are greased enough to shine through. With all of that being said, go see it. It’s damn funny when it wants to be.

“I don’t think I’ll find anyone like you in the basement.”