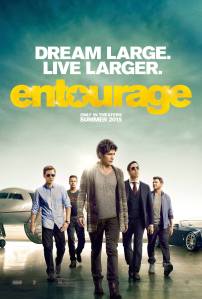 “I may have to jerk it before we even get there.”

As a fan of the series, I understand how the die-hards will march into theaters on opening weekend with the above quote firmly stuck at the front of their minds and yelling “Victory!” (you’ll get that if you’ve watched the show.) Entourage has a large, not massive, but still sizable following. Why? Because it lets you in on the fun. Because it feels good to vicariously feel this cool. It’s been four years since the series finale and people are simply excited to see these characters they became accustomed to welcoming into their homes on a weekly basis. Entourage is a prolonged and stitched together running sentence of a movie, combining enough material in 1 hour and 45 minutes that it normally would have spread out through 6, maybe even 8 episodes. The story itself doesn’t really work as a movie…I’m not sure what to call it. Maybe an anthology. But if you liked the series you’ll enjoy this revisitation with the boys from the Bronx who somehow made it in the Hollywood hills. 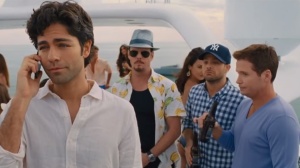 From the get go, we see the crew doing what they do best as they enjoy a yacht party in the pellucid waters of Ibiza. There’s an odd but effective refresher/introduction by way of a Piers Morgan interview. The scene is purely exposition, and while that’s lazy on behalf of the writers, it’s still nice to have for those in the know and those new to the party. Vincent Chase (Adrian Grenier) is single after a failed marriage of 8 days, looking to take a new direction with his career. Nice guy manager Eric (Kevin Connolly) has woman troubles, as per norm. Turtle (Jerry Ferrara) still plays chauffeur while running a multi-million dollar Tequila company. Drama (Kevin Dillon) hopes for a career resurgence with Vince’s new film after being an industry running joke for decades. And Ari (Jeremy Piven) struggles to balance his duties as a studio head, parent and father, and the stresses brought on by his old star client and his tailing team of buddies. 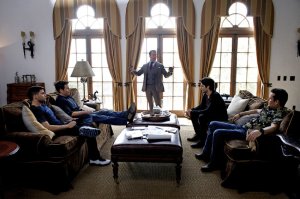 Vince decides he’s directing the next movie he stars in, which Ari has lined up to be Hyde. It’s a comically terrible reinvention of the Jekyll-Hyde story in a futuristic L.A. with a DJ…the scenes shown are hilarious entirely because they’re awful. A lot of this film’s screentime goes places that it shouldn’t. We get far too much of Haley Joel Osment as a jealous scapegrace trying to sabotage Hyde, the movie his wealthy family has invested millions in. Osment is wildly entertaining, but the character is too unlikable, and his long stretches in turn become unbearably cumbersome compared to the rather airy approach the rest of the film takes. And then there’s one cameo after another and another. It was fine in the series. There was normally one large celebrity role, and the rest of the 30 minute show had the kind of quick greetings and flashes you’d expect to encounter as a movie star navigating the high life of Los Angeles. The movie makes it feel like an overly welcoming and extended guest list to a 24/7 party that refuses to end. 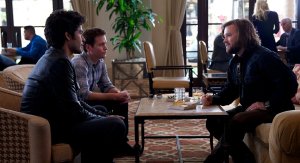 Entourage just doesn’t feel like a movie. There’s no emphasis on the drama, no real justification to the path of the story. It unfolds, and the process leaves wrinkles aplenty. The series wasn’t necessarily built on cliffhangers, but it always had more on its mind and to look forward towards. That’s what they depend on to set the hook and reel us back in the following week. Here the technique doesn’t work, and rather than time off serving as a segue we get multiple dry segments without any purpose, laughs, or insight into what’s to come. It may seem unfair to judge a movie by the series so intensely. Yet that’s what creator/director/writer Doug Ellin sought out to achieve. The movie has the same tone, the same guys doing the same things we’ve seen them do year after year, going up and down over and over.

I don’t mean to be grating in this critique. I own every season of the series on DVD. I’ve seen every episode at least twice. Critics are trying to deride this movie, as well as the show, because of the nudity and the partying and the sex and the womanizing done by the hopelessly harmless quartet of leads. But the thing about this kind of lifestyle is that it is part of reality. It can exist. Just look up Dan Bilzerian on Instagram and you’ll quickly realize that some people really have these kinds of lifestyles. And if you still disagree, at least try to acknowledge and accept the fundamental reasoning for Entourage’s existence in the first place. It serves as a male fantasy vehicle of debauchery and fame. We all want our taste, our 15 minutes in the spotlight.

It’s just that experiencing the stardom as a feature length film is the wrong approach to such a callous yet compassionate collection of people and actions. But like the movie, this is about business, and HBO is certain to profit more from a theatrical release than another slated season. And while the movie completely soils what was a satisfying series finale, it’s nice to see the gang together again. Entourage may be unwarranted, but it certainly isn’t unwatchable. You’re sure to like it if you enjoyed the show.

“I like to think of myself as loyal, not blind.”