“They just wanna get reactions out of people.”

Unfriended is the scary movie of the now, a gimmick story pumping on all cylinders with a resonating cautionary tale to back it up. Please, do not judge this movie off of the trailers. Most of the preview footage was shot only for marketing purposes and thankfully does not make it into the finished product. This story hacks into your nervous system like a virus ready to release anxiety, query, and a thoroughly engaging movie with coverage on a hot topic of the moment. Unfriended proves that nothing on the internet ever dies, and that meaningless bullying has transcended sticks and stones to willingly abet hate crimes.

Here is a film that is as nontraditional as it gets. Unfriended takes place entirely through the computer screen of our de facto lead Blaire (Shelley Hennig). We see her open tabs including Facebook and shopping carts, iTunes, and a Skype session with her high school pals. Blaire’s evening starts with a sexy video chat with her boyfriend Mitch (Moses Storm), only to be interrupted mid foreplay by their friends. Adam (Will Peltz) is the rich kid with a blossoming drinking problem, Jess (Renee Olstead) has been around the block once or twice, and Ken (Jacob Wysocki) is the heavyset and techy guy of the bunch always trying to get a laugh. Sure, they are all stock characters, but that’s okay in this genre because it quickly and effectively establishes each person. Even though they seem like unlikely friends you never question the relationships they have. And those bonds are to be tested on the fateful anniversary of their past friend’s suicide. 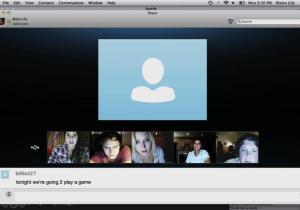 Laura Barns used to be a part of this group, until unflattering videos were posted online and she became bullied, receiving countless messages to kill herself. She followed through by blowing her face off in the school parking lot. Through ingenious storytelling we discover online (of course) of instances where the dead communicate through the internet. Laura enters their chat and starts a game, picking off her former “friends” one by one. Unfriended ignites the fire beneath the story’s sharp critique of our teen culture. In the faceless era of the internet, a certain amount of culpability has been lost. People hide behind their hateful comments and behavior by saying, “But I didn’t really mean it.” And they really think they can, because the internet is alive and organic, like an amoeba always changing shapes. Each keystroke creates life, and more disturbingly, each backspace highlights our newfound ability to go back in time. It takes away from our natural human instincts.

Working off of Nelson Greaves’ snare drum script that perfectly mimics the manic thumb smashing teenage texters, Director Levan Gabriadze and his team do magnificent work. Seriously, it’s like watching David Blaine do street magic. I was baffled by just how intelligent and well pieced together such an apparently unsophisticated film was able to be. That’s because like the famed sleight of hand artist, Gabriadze utilizes the natural movements of computer navigation. Blaire’s cursor directs our eyes as much as Gabriadze did his actors. (Side note: I’d love to see an eye tracking test be done with this film’s audience…it really captures our inner cognitions.) I have to praise this young cast as well. Through crafty production, each actor got a room to themselves in a house and actually recorded their performances simultaneously reacting in real-time. What the production team accomplished is amazing, and if you’re interested in more check out this incredibly detailed  article.

Unfriended has a few minor hiccups towards the end and takes a while to hook us, but its underlying meaning is what makes this film about a killer cyber ghost sidestep genre horror and find a niche in reality. Last year it was reported that more than half of our young people were cyber bullied. And more alarming, roughly 90% say they witnessed others being bullied online and did nothing. This film shows, perhaps better than any other I’ve seen, the double lives that technology creates and allows. We all have our online selves, using exclamation points like periods and “lol’ing” while our offline selves look at our screens with our worst resting bitch face, so glossed over that Ben Stein could sell us eye drops. For a teenage screamfest shown through a laptop screen, Unfriended manages to earn scares while giving an assessment on our cultural shift and divide. We’re becoming victims of Plato’s Allegory of the Cave, and I’m happy to have been frightened and illuminated by such a disarmingly unpretentious film.