“Excuse him, he has stink dick.”

Sometimes you have to give a bad movie credit where credit is due entirely because of the sheer audacity and bronze balls it has to even reach liftoff. Compared to the recent work of Seth Rogen and creative partner Evan Goldberg, The Interview is the derriere that they literally force jokes into, both onscreen and on the page. The laughs are infrequent, the bromance is almost annoying, and the amplified violence can be unreasonably grotesque. I’d compare it to an episode of South Park that was unsuccessfully brought to life. Yet it’s still a scantily funny movie with a handful of uproarious scenes. What impressed me most was the artistic bravery. We could live in a 1984 society and the general public would still be able to acknowledge that Kim Jong-un is an unhinged and deranged man. No cowardly lion could’ve made this movie. So even though it’s a stretch to label it as “good”, I can’t completely discredit it. Effort counts in all things, and this is no exception.

Dave Skylark (James Franco) is the host of a late night celebrity gossip show. Dave throws a surprise party for friend and producer Aaron Rapaport (Seth Rogen) who has been on with the show for 1,000 episodes. A snobby guest sours the party for Aaron, reminding him that he’s feeding the masses empty calories while the acquaintance is working for 60 Minutes. It’s a fairly effective plot device that prompts Aaron, and eventually Dave, to tell real and hard-hitting news. To their surprise, and the rest of the news world, Kim Jong-un is a huge fan of the show. They secure the ultra-exclusive interview and celebrate during a night of partying with drugs and drinks. Cue next morning; Aaron struggles to answer the door, quickly sobering up at the presence of C.I.A operative Agent Lacey (Lizzy Caplan). The two fools are asked to take out the supreme leader of the Democratic People’s Republic of Korea.

The Interview is pretty subpar and sorely lacks laughs until the midway point. You can watch the trailers and not miss anything from the first half of the movie. But things slowly fall into place once the two enter North Korea. They’re greeted by Sook (Diana Bang); she’s in charge of controlling every aspect of the interview. And then they meet Kim, played by Randall Park who absolutely steals the movie. Kim’s a manipulative overseer who forges a friendship with Dave. He gifts puppies, bronze busts, takes Dave for a joyride in a tank. In all honesty, Kim Jong-un isn’t presented as such a bad guy to start. At times he’s even likable, although that doesn’t last.

These are basically the same characters from This Is The End. The Dave Skylark that Franco plays just isn’t very funny. I’d liken him to Kelso from That 70’s Show without the goofball and airheaded laughs that the TV character thrived on. His lone hilarious moment is derived from Katy Perry’s song Firework. Then there is Aaron Rapaport…and that’s about it. He wants to be legitimized, but does he really have to travel to one of the most dangerous countries in the world to find vindication? It’s a battle of extremes, which is par the course for all comedies, but everything plays as a pinball. Like the arcade game, sometimes the beats hit for bonus points, and others zoom straight down the pipe. If not for Park and Bang, who really do some fine work here, the movie would have failed altogether. 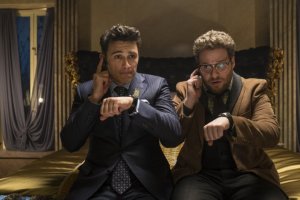 Despite the uneven results, The Interview is a game-changer for the Hollywood model of film distribution. Production companies won’t go straight to VOD with big budget movies like this, but for the smaller titles it’s definitely going to become a trend, even moreso than it already is. The biggest problem with The Interview is the actual interview itself. They set out to embarrass and humanize Kim Jong-un, and they do so by revealing that he really does, “pee and poo.” That’s not clever or farcical; it’s just dumb, as is a lot of the movie. This is a gutsy film, but when critiquing the comedy that mocks American media and nationalistic loyalty as much as it does the most dangerous leader in the world, it fails in nearly every other aspect. The Interview could have been a powerful voice in storytelling, if only it had bothered to do a mic check first.