“No man is a failure who has friends.”

In 1946 It’s a Wonderful Life somehow was a box-office disappointment, especially when compared to the cultural cannon status it’s attained today. Coined as too sentimental and unrealistic, the all-time great was a total bust. Director Frank Capra poured countless dollars into building the town Bedford Falls, which at the time was one of the largest studio sets ever constructed (stray animals were famously welcome to make themselves at home.) Now, due to a clerical error that didn’t renew the film’s copyright, it’s been given new life with its annual viewership on NBC every Christmas Eve. It’s a Wonderful Life has become more than a film for countless individuals and families; it is now a tradition. Every time I watch it, which is usually at least a half-dozen times a year, I think about that clerk. I think about their error and how happy it has made me and millions of others. Plain and simple, It’s a Wonderful Life is the best film that has ever been made. No other movie comes close, and here’s why. 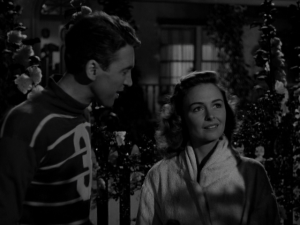 Yes, this is shown on Christmas Eve, but that doesn’t make it the quintessential holiday film everyone makes it out to be. Most neglect how deeply sad and moving the story is. George Bailey (Jimmy Stewart) is a family man who has lost all hope. He’s abandoned his dreams and sacrificed his life to be a servant. To put others first. He was a young man, inspired by the likes of National Geographic Magazine, dead set on travel and seeing the world. A man who had to throw all of his ambitions and aspirations away to carry on the family business he despised and to help those he loved. Many hear It’s a Wonderful Life, and as the title implies, automatically think this is another happy Christmas story. But they forget a defeated man, with a wife and children and family, so distraught over lost money and so pummeled by the rough round trip train of life that he’s willing to jump off of a bridge into the deadly cold water below and end it all. Few films ever show the main character at their lowest of lows and allow us to watch them become whole again.

What’s best about It’s a Wonderful Life is its artfully exaggerated portrayals of existence. George Bailey is the epitome of the everyman, one of Capra’s most utilized archetypes. Working class, understudied, generous and universally kind. He marries a younger woman named Mary (played by the consummate beauty Donna Reed), they get hitched, make a beautiful home out of the abandoned house on the block. Everything’s as centralized to Bedford Falls as you can imagine. But the supporting group of characters, for my money the best ever written, work as single ingredients which make up the entire story world. There’s the lawful police officer Bert (Ward Bond), the ambling taxi driver Ernie (Frank Faylen), the salacious town stunner Violet (Gloria Grahame), the prodigal son hero Harry Bailey (Todd Karns), the forgetful Uncle Billy (Thomas Mitchell), and the local Scrooge Mr. Potter (Lionel Barrymore). They’re a wide-ranging and balanced ensemble.

This picture defies genre. It’s science fiction, drama, slapstick comedy, romance, adventure, thriller…the list goes on. Never have I seen a film that successfully melds so many together while maintaining its tone throughout. While teaching us Hamlet, my beloved High School Literature teacher Mrs. Renshaw told the class, “Every great story is a redemption story.” Those words carry with me to this day, and they never resonate more than when I revisit this tale of change for the worse and then back for the better. George Bailey is important, he’s redemptive, he just doesn’t always know it. Even when he’s being helped, George still serves. He gives an angel his long-awaited wings. Gosh, what impeccable writing, what incredible storytelling.

Religious in the most secular definition of the word, Capra’s story looks back on the life of George Bailey through the lens of Clarence Odbody AS2 (Angel Second Class, played by Henry Travers), a guileless angel desperately awaiting his time to join the ranks of his peers. He stops George’s suicide attempt, who then tells his guardian angel, “I suppose it’d been better if I’d never been born at all.” The choirs sing and the lightbulb goes off in Clarence’s head. Just like that, George Bailey ceases to exist. What’s amazing is the patience Capra has to take us there, waiting more than an hour into the film. We get setups, payoffs, and some of the most beautiful scenes in the history of cinema. George and Mary competing in the Charleston as the dance floor opens to the pool beneath. The two throwing rocks at the windows of the Old Granville House hoping to break glass and make a wish. Their shared passionate kiss, one of the most intense ever put on film. George coming out of his dreamy stupor, happy to realize that his lip is still bleeding, that he’s alive. This is a love story by all measures. 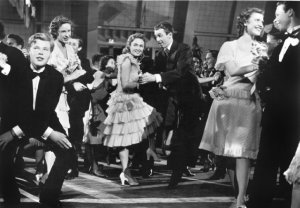 Not only is this a love story with one of cinema’s greatest romances, it’s a love story of life. Adapted from Philip Van Doren Stern’s 1943 short story The Greatest Gift, It’s a Wonderful Life is an annual reminder for a vast number of people that they have significance. That despite financial problems, relationship woes, work issues, all the things (things, that’s the key word) that we so often let knock us down, we matter. The unwavering American spirit is a clear theme that spreads across all of Capra’s filmography. All walks of life, the yuppies and the penniless, often merge in the bank run landscape of Depression Era America to find a communal sense of happiness (go watch American Madness, Mr. Smith Goes to Washington, It Happened One Night, You Can’t Take It With You.) Capra, Stewart, and Reed have collectively said that of all the films they’ve made, It’s a Wonderful Life is the best. And that’s the God honest truth. 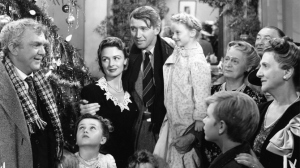 By story’s end George has saved the Building & Loan business, defeated the power-hungry Mr. Potter, and salvaged his marriage. Once the masses pour into the Bailey’s creaky old house, shelling out money to help a man and his family on the brink, and join together in singing Auld Lange Syne, a song of renewal, you can’t help but shed a tear. George’s younger brother Harry leads a cheers saying, “A toast to my big brother George: the richest man in town.” Love is a bountiful gift. Stewart, with his lanky frame and slow drawl, takes us through the life of a man we all know. We are George Bailey. He’s the everyman so that as an audience we can put ourselves in his shoes. And even if it’s only for three short hours every Christmas Eve, you feel good about yourself. You’re given hope. You experience every emotion that comes with that indescribable four letter word we all know. The powerful magic of movies can do that. It’s a Wonderful Life is more than a movie. It’s a way of life.

“Strange, isn’t it? Each man’s life touches so many other lives. When he isn’t around he leaves an awful hole, doesn’t he?”