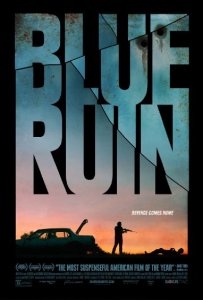 “You point the gun. You shoot the gun.”

My junior year of college I took a course on French Cinema, highlighted by the influences and aftereffects of the implemented social structures over time. Sounds boring right? It was quite the contrary with a dedicated professor who had experience living in Paris. One film we studied was Agnes Varda’s Vagabond, the stark character study of a young woman drifting through the South of France. Blue Ruin has that same feel with the added effect of deep-seeded revenge. This is one of the most unique and morally corrupt movies to come out this year. It’s a tale of two families, forever and unwillingly bound, dead set on sullying their hands through vindictive destruction. Blue Ruin is ambiguous, foggy, and violently bare-knuckled.

Dwight (Macon Blair) is a wanderer, an ungrudging piece of human tumbleweed. The bearded and grungy man splits his time between living on the beach and inhabiting people’s homes while they’re gone. A police officer delivers him disturbing news…the man held responsible for the murder of his parents is set to be released. Dwight’s an absolute wreck and an adult who clearly once had his life together only to allow one life-changing event to steer him completely off course. Hearing that Wade Cleland is out living the life of a free man is enough to wrestle Dwight out of hibernation, out of hiding. 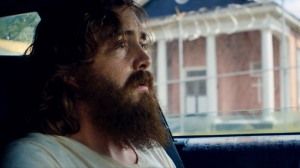 Blue Ruin becomes a bit of a chess match as it gets farther into the story. Not much of the plot can really be said without spoiling some “Aha” worthy moments. Dwight goes back and forth with the members of the Cleland family, exchanging blows as if both sides bleed eye for an eye beliefs. There are stakeouts, surrenders, negotiations, and eye-opening discoveries. I can understand if the movie loses some people, but I found it so thoroughly engaging. I started it at two in the morning expecting to fall asleep. 3:30 came along and I was struggling to process what I just watched.

Macon Blair will largely go unheralded for his work here in the awards circuit, but this is one of the best leading male performances of the year. His bleached and ghoulish eyes are the perfect foundation for Dwight’s seesawing demeanor. You’ll pity his pathetic puppy dog appearance and callow inability to think things through before he acts. Then you’ll see him piss on Wade Cleland Sr.’s grave and wonder what the hell is going on inside his head. Dwight is not a good person, neither is he a bad one, and that’s the dilemma the viewers are given. It’s almost entirely because of Blair’s unflinching display of moral decay and misinterpreted understanding of self-ascribed justice.

Writer/director Jeremy Saulnier has put together an intense and in-depth look at family estrangement and the destructive rifts that unreasonably pop up between two separate factions. In the thick of his cat-and-mouse quest for vengeance, the cowardly anti-hero Dwight takes refuge in his sister’s house, asking her to take her child and leave in case anything happens. She looks him dead in the eye and says, “You’re weak.” And the thing is, Dwight knows it. This new edition of the neo-Western genre is jam packed with these kinds of affirmations and revelations. To me, it’s about persistent elusion, the pursuit of what is right and fair while not resisting the thoughts poured into your head by the devil on your shoulder. This soon to be cult classic is a treasure hunt where the X marks the spot discovery will leave you dumb-struck. Blue Ruin is a harrowing, taut, and bloodily blitzing story of malevolent redress.

“I’d forgive you if you were crazy. But you’re not.”