“Love is just an all purpose excuse for selfish behavior.”

This movie was one of my most anticipated of the year. I greatly admire the romantic comedy genre because it’s so tough to feel fresh without being an imitation. It’s so limited that you’re really able to discern an average movie from an exceptional one. A standout cast and engaging trailer pulled me in to wanting to see this, however, the end product had me repeating the titles divergent question to myself. And by that I mean a question with no specific answer, not referencing the young adult franchise. Despite such charismatic performances, What If plays it so safe that you’ll be left wondering what actually could have been done differently and better.

Wallace (Daniel Radcliffe) is a self-described loser. He works a dead-end job writing instruction manuals and resides in his sister’s attic, playing nanny for her young son Felix. It’s not hard to pity him at the beginning. Sitting on the roof, he listens to an ex girlfriend’s voicemail, one that was saved for hundreds of days, and then finally deletes it. Wallace (I loved the names in this movie…they’re all so memorable) is a cynical romantic at his core. Why chase somebody and look pathetic or risk pushing the envelope and seeming to be a sleazeball? He’s comfortable in the lonely niche that he’s carved out for himself. 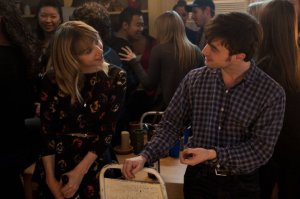 Typical of the genre, the two main characters, as well as the important side players, all meet at a party early on. Wallace’s best friend Allan (Adam Driver) introduces him to his cousin. It’s unrequited love at first sight when Wallace catches a glimpse of Chantry (Zoe Kazan). Allan immediately hits it off with Nicole (Mackenzie Davis) the moment she walks through the door and leaves the two awkward acquaintances to attempt small talk. For how bad they both profess to be at conversing, it’s a sheer success. They hit it off, walk home together since they live close by, and exchange numbers. And Chantry tells Wallace, and us, that her boyfriend is probably waiting for her. 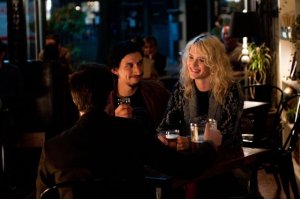 There is a lot wrong with this movie, or maybe it only appeared that way since I had such high expectations going into it. Before I knock the bad elements, I’d much rather give praise to the things that worked. First off, the dialogue is sharp and insightful. Not since (500) Days of Summer have I seen a romantic comedy where the exchanges felt so visceral and human, as if the actors were given an opportunity to riff and create on set. Parts of the story manage to feel realistic as well, embracing the candid moments often shared with someone of the opposite sex. Eventually Chantry begins to struggle with her emotions when her fiancé Ben (Rafe Spall) moves to Dublin for work. Wallace is hit on by Chantry’s sexually driven and reeling sister Dalia (Megan Park). This is the type of movie you can enjoy solely because of the acting. 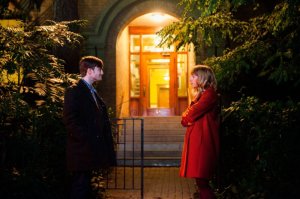 Any positive reception to the movie has to be credited to the performances given by the young cast of promising actors. Radcliffe marvels as the nice guy who can’t cut himself any slack and Kazan defines quirky, sexy charm. They prove to be an admirable screen duo. Davis is mediocre, mostly because of her narrow character. But look for Adam Driver’s work as Allan. He’s hilarious and plays dumb in such an intelligent way that when the emotional scenes come it’s surprising and heartfelt. The acting is inviting on all accounts.

What wasn’t so refreshing though was the story. There are endless poop jokes, oddly animated shots grasping for emotion in thin air, and an inability to go any place but where the audience expects it to. On top of that, for being a brisk hour and forty minutes, it felt incredibly long and at times tiresome. All of these problems jumble the pace and tone, which can’t seem to pick between jocularity and sincerity. I couldn’t help but think that director Michael Dowse was disengaged from his cast and the audience. Maybe it’s that or the script’s fault that the movie didn’t come together. Either way a crucial piece is missing.

The entire movie is too black and white. We’re supposed to believe that Wallace only wants to be friends with Chantry the same as she simply wants somebody to have fun with. They constantly beat themselves up while waiting to find the fulcrum that supports each of their emotions for the other. It never works because we see their actions throughout, and although the film’s ending brings it up, we’re betrayed by the characters’ inability to see what we see in their interactions. To feel what we feel. They belong together. What If is a wickedly funny film. It has the right formula, but sports poorly executed scenes that don’t build the story or relationships and should have been rethought. Still, the charming performances and dazzling dialogue make this a serviceable film that is just a caricature of previous romantic comedy classics.

“If you’re lucky it happens once in a lifetime.”