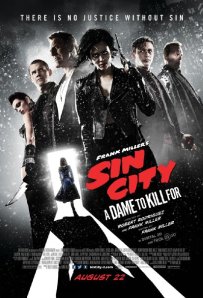 Sin City: A Dame to Kill For is not a movie. At least not in the traditional sense. Like the original, it’s a series of bleak vignettes that cross lapses in time and run from one story into the next without any clear intention. I’d be lying if I didn’t admit that the effects were well done. Every frame is so graphically stylized and polarizing. The visuals don’t compensate for the onslaught of monotony the story brings. This is like the bully in grade school that never grows up, never gets smarter or more mature. All it has to offer is non-stop violence. 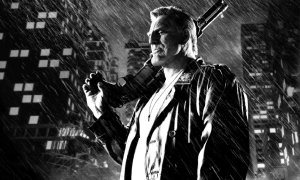 Five different segments make up the web that is Sin City 2. First; Marv (Mickey Rourke) confronts a group of young men assaulting a homeless man. Second; Johnny (Joseph Gordon-Levitt) plays a cocky gambler whose fortunate luck lands him in a hot spot after beating Governor Roarke (Powers Boothe) in a backroom poker game. Third; Dwight (Josh Brolin) comes to the aid of Ava (Eva Green), a sociopath determined to have others do the dirty work for her. It’s easy since he has a soft spot for the crazy woman. Fourth; we revisit Johnny as he swears revenge on Roarke. He knows going back to the poker table is a death sentence, but he has his motivations. Fifth; Nancy (Jessica Alba) vows to avenge the death of her deceased love John Hargitan (Bruce Willis). With the help of Marv, she sets to take out Roarke. 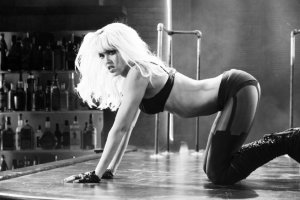 Phewww. I’m sure that was as exhausting to read (I assume you skimmed it) as it was to write. That’s what I meant from the beginning. There is no A, B or C here. No strict beginning, middle and end.  Therein lies the problem. Audiences can’t connect to anything that quickly, not the way that it’s done in this film. Robert Rodriguez, director of both installments, obviously stays true to the comics and gives the die-hard fans a faithful depiction. By doing that he sacrifices the viewing experience of every group unfamiliar with author Frank Miller’s work. 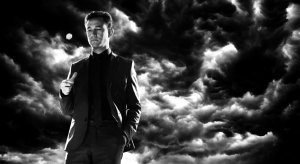 Johnny the gambler is the only worthwhile standalone story. He describes his part as “The long bad night.” Cut the rest and make the movie only about him, which they could’ve, and I’m in. I’m completely sold. But that’s not what they did, instead opting to be too honest to the comics. The large scope and multiple stories take away from one another. How can you possibly develop one thorough idea and expect the rest of the movie to hold up to the bar that’s been set? That’s nearly impossible. 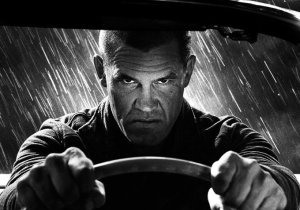 The MPAA should be ashamed that a movie this passionately gory and committed to vicious behavior can receive the same R rating as films like Boyhood. There is a difference between being artistic and purposefully injecting shock and disgust at every opportunity, sometimes on a whim. Violence can be learned. That’s a fact. I could only sit there and constantly think about all of the little boys (come on, how many young girls want to watch this?) that will be delighted when eyes are pulled out and bodies are dismembered. Excessive and extreme bloodshed is favored over telling a more personal film. 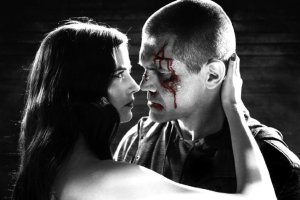 Not until it was over and the camera zoomed out over the decrepit city did I realize how much I disliked this movie. Honestly, there’s no point. Sure it looks good. So does the pretty blonde standing at the bar with shit for brains. Every story is supposed to have a point, a moral, or a message that is trying to be conveyed. That’s literally what they’ve always been meant to do. I racked my memory, reread my notes four times, even looked at the synopsis on Wikipedia to see if I missed something. Nope. Sin City: A Dame to Kill For exists simply because it can. And it will be forgotten just as easily.

“This rotten town…it soils everybody.”