With Blended, the above quote is exactly what you get, and Adam Sandler makes it a staggering eight consecutive bombs. Not since 2009’s Funny People has he been in a decent movie, and that film was mediocre at best. At some point you have to feel like he has stopped trying. Surely, all of the blame doesn’t fall on his shoulders. This was directed by Frank Coraci, the same guy who made The Wedding Singer and Click. And you would never guess so. Most of it looks and feels like a half-hour network sitcom. It’s the pedestrian, run-of-the-mill kind of movie we’ve come to expect from Sandler. Think of his work and you’ll immediately go back to the late 90’s. Then look at the writers of those movies, and notice how he co-wrote or at least assisted on most of them. He’s a very, very funny guy when he’s doing his own thing. I just wish so much comedic talent wasn’t wasted of late on writers who don’t know how to make audiences laugh.

Sandler plays Jim, a sports fanatic who manages the local Dick’s Sporting Goods store. He gets setup on a blind date with the newly divorced Lauren (Drew Barrymore), a mother of two boys who organizes closets for a living. Of all places, he takes her to a Hooters, which later on supplies some of the only earned sentiment the story tries to achieve, even if it is pure schmatlz. Needless to say the date goes horribly, mostly because it’s so awkwardly paced. Sandler plays the character like he is a jerk to begin with, which completely betrays how we come to know him later. We’re told that his wife died of cancer after Lauren wrongly assumes a bad separation took place. It’s the kind of thing audiences would have connected to more had it been shown and not squarely thrown at their faces. He leaves, pays his half of the bill, and we’re supposed to assume that’s where their story will end. But even more unnecessary exposition and strained attempts at humor / emotion lie ahead before the movie gets where it tries, and eventually fails, to go.

Lauren and her two boys embark on the summer vacation of a lifetime to faraway Africa. But due to a mistake, Jim and his three daughters end up going as well. Don’t worry how or why it happens, because reading it would be just as unbelievable as what they try to convince us of in the movie. It’s a getaway at a lavish resort for blended families. How convenient. None of them get along, but each parent is so desperate to salvage the trip for their kids’ sake that they eventually come to terms; they’ll make it work. Low and behold Jim fills the empty fatherly role for Lauren’s wild boys. She helps reveal the hidden female features that he’s purposely masked on his daughters with androgynous haircuts and sports gear. You probably wouldn’t be surprised if I said that things turn romantic for Jim and Lauren. After all, just take a look at the poster. It’s too predictable for its own good. 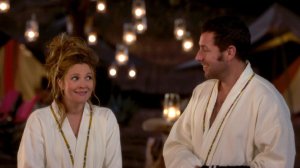 The movie as a whole wafts around in the middle ground of making a serious statement on the process of letting go and childish antics. There’s Jim and his deceased wife. Lauren and her absent ex. Her eldest son’s stranglehold on her relationship status. Jim’s daughter Espn (yes, named after the sports network) believing her “invisible” mom is always around. The list goes on. None of it succeeds. It’s forced, inorganic, and tonally inconsistent. Sandler’s usual buddies linger around in parts that don’t matter, as if they asked their pal whether or not they could play a small role in his new movie and he said, “Sure, why not?” Also, while it pains me to make such a harsh statement, the young actors in this movie are abysmal. The lone exception goes for Bella Thorne, who plays Jim’s eldest Hilary, or as he calls her Larry. The kids don’t seem to know how to act, and the characters written for them are so annoying that you wish they were left behind for the trip a la Kevin McCallister. 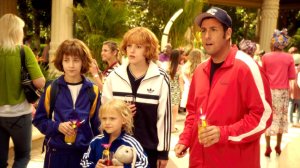 The late Roger Ebert once said, “No good movie is too long and no bad movie is short enough.” Blended is both too long and bad. By far the worst quality is the use of dumb, cruel humor. Who is going to laugh at obnoxious little league dads or brief scenes of rhinos fornicating? It doesn’t live up to the title, as each scene just aimlessly follows another, never cohesively forming into an interesting story. After such enjoyable outings as The Wedding Singer and then 50 First Dates, I had hoped for another solid romantic comedy from Sandler and Barrymore. Here, the two are not romantic, and they sure as hell are not funny. I cracked a half-smile three times, even felt an ounce of sympathy at one point. Then it was over, not soon enough, and for about an hour it was all I could think about. Because it’s that bad. This inept box office bomb will assuredly be one of the worst big budget films in 2014.

“No, he’s a good daddy… He’s a bad daddy! He made me look like the walking dead!”