Comedies with a hard R rating are a rare breed. They can’t bring in as big of a crowd, leading to less ticket sales, and the subject matter can sometimes put people off. Neighbors earns its R rating and then some, nearly bordering on NC-17 territory (that’s the kiss of death for any film…theaters won’t play those.) This is one of the funniest movies of recent years, and among the dirtiest. The story is completely preposterous and virtually impossible to believe, but the jokes just keep coming, and you can’t help but laugh. Underneath the slew of shenanigans is a fear of the future and what you might become, as well as the inability to really grow up, however you define adulthood. I have a hard time imagining a funnier movie being released this summer. 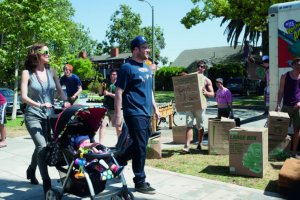 Mac Radner (Seth Rogen) and his wife Kelly (Rose Byrne) aren’t your typical suburbanites. He smokes a joint with his buddy on their break, she curses like a sailor. They still lead a fairly normal life. Sometimes they spend their evenings playing under their daughter’s mobile, or falling asleep while trying to get ready for a night out. And other times they’ll have sex in the living room with the curtains drawn open. They seem to be a pretty realistic portrayal of a modern young couple, although they’re undoubtedly shown in the most extreme fashion. Life in the neighborhood isn’t too bad until their new neighbors show up. The members of Delti Psi move in next door and it’s clear from the onset that this isn’t going to work.

Led by their macho President Teddy (Zac Efron) and closet-geek VP Peter (Dave Franco), the members of Delta Psi are entirely committed to their brotherhood. They’re also fixated on joining the frat’s lauded and legendary list of parties by throwing the biggest end of the year rager in history. We quickly get motives from both sides of the property line, which include the frat’s longing for drunken immortality while Mac and Kelly just want some peace and quiet for their infant daughter. A hilarious sequence finds the Radners joining Delta Psi for a night of debauchery and inebriation, forming a trust and friendship with the college kids on the other side of the fence. But once they get fed up and call the cops, the trust is broken, and war begins. Nothing will stop either party from making their next door neighbors’ lives a living hell.

From Nicholas Stoller (Forgetting Sarah Marshall, The Five-Year Engagement), this movie starts out like a modern adaptation of Hitchcock’s classic Rear Window. Mac and Kelly spend a good part of the film observing the antics happening next door from inside the comfort of their own home. The story turns full heist / infiltration mode once they get past their anxiety and the hysteria happening a stone’s throw away. The two, with the help of their friends, decide to take things into their own hands. The look of the movie almost turns into a copycat Spring Breakers. Not that that’s a bad thing. This story isn’t sophisticated by any means. It’s full of raunchy humor, most of which I was happy to see didn’t resort to being overtly cruel. The writers prove you can be crude and humorous without being unnecessarily mean. 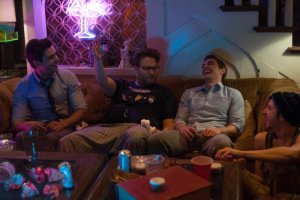 The fraternity ends up on probation and banned from throwing parties, but after being tricked by their neighbors, eventually have their end of year sendoff after all. Everything culminates nicely and doesn’t rush too much. And it is hilarious, through and through. See it with as many people as you can. Rogen is reliably quick with his improvisational skills, but it’s Efron and Byrne that really stand out. We got a glimpse of their comedic chops in films like That Awkward Moment and I Give It a Year, yet this time around they get to shine. Their performances are a bit of a balancing act, ranging from convincingly kind to unreasonably diabolical.

The actors succeed, and for the most part so does the movie. The run time needed to be longer. Some of the irrelevant ad-libbing could have been cut down and been replaced with character development. Everything finishes way too abruptly, and when it ends you’ll probably be thinking, “Wait, so it’s over?” Despite that, and its vulgarity, the movie has heart almost in the same vein as a Judd Apatow production. I think it’s better that I only lay out the plot and save the jokes because it truly is hysterical. But just as a hint, the last twenty minutes includes a fight sequence where dildos cast from the frat member’s penises act as battle weapons when Efron and Rogen finally square off. That’s certainly not for everyone, but if it sounds funny to you, just wait until you see the entire movie.