“A long time ago, it is said, a monster came here.”

Kinetic and thoughtful and fantastically well made from start to finish, Prey might just be the most unexpectedly great film I see in 2022. There’s nary a false note throughout, and it uses its simple story to explore bigger themes like colonialism and patriarchy, all while engaging viewers with nail-biting action sequences and some of the most inventive stunt choreography of the modern era. Not since the 1987 original Predator have we seen this franchise work as well as it does here, and I’m guessing it’s because Prey feels like such a singular endeavor. I only wish that I could have seen it on the big screen, hushed with dread and exploding in celebration in a packed theater. It’s such a visceral picture. You can’t help but be totally and utterly in it. I loved every second.

The year is 1719, nestled on and around the hills and the woods and the rivers of the Northern Great Plains. We see Naru (Amber Midthunder in a truly star making performance) trying to join the hunt when she’s told to stay back. Her older brother Taabe (Dakota Beavers, stoic and great here in his acting debut) fills the role as a masculine leader for the Comanche tribe, but while he tries to hold Naru back as a gatherer and healer instead of a hunter, he also sees her potential. She can track well, is resourceful, and sees the little details that everyone else misses. They’re looking for a mountain lion. But she’s seen that a more imminent and deadly threat is out there, hunting and preying. Naru knows her people are in danger. She goes on the offensive towards the unknown. 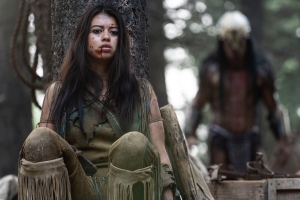 Gorgeous establishing shots by cinematographer Jeff Cutter immediately settle us into this sprawling landscape, and the propulsive score from Sarah Schachner manages to speak volumes when silence is the best way to stay alive, deftly blending advanced electronic elements with those that are more primal and inherent to the Comanche ululating. More than anything though, the direction and vision from Dan Trachtenberg is something to behold and admire. He’s a filmmaker who knows how to build tension through action, through inaction, and he’s able to play you like a pianist’s fingers sliding along the keys, gliding up and down and around the entire environment. He’s so obviously in control of the entire endeavor. It’s the best survival film I’ve seen since A Quiet Place Part II, and that’s saying something. 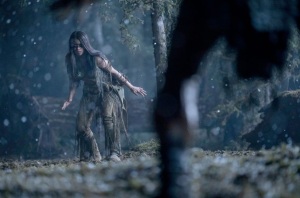 With its subtle and sublime use of CGI, as well as it’s knack for visual storytelling, Prey evolves from something primal into a deeply metaphorical film about your deepest and most invisible fears becoming tangible. It’s about resourcefulness, resiliency, and confidently facing those fears head on with an axe in hand and a confident attitude. Prey is simply gripping from start to finish. I’m just as surprised as the next person to call it one of the best films of the year, but then again I’d be lying if I said otherwise. I can’t imagine it being any better, mostly because it’s damn near perfect.