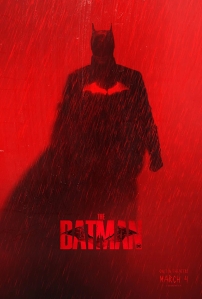 “They think I’m hiding in the shadows.”

A grueling labor of love in its conception but mostly unfulfilling in its delivery, The Batman is a grandiose film made on a poorly mapped molecular level. Everything here feels hyper personal or all too out of reach – there but hardly ever here – and because of the constraints from the myopically noirish vision, it’s less intimate than one might imagine going in. The craft and the technical aspects are there in spades, but they don’t ever dig deep enough to give this bland film much of an identity either. It’s loosely turned over gravel narrated by groveling. The Batman is way too overlong, underwhelming, and sports surprisingly lazily written dialogue. The handsome looks, strong jawline, and believable world building can only carry the weight of its overwhelming runtime for so long. As the plot stokes and encourages collapse, so too does the picture. 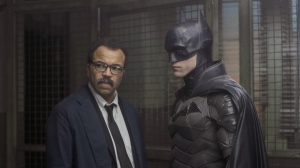 I can’t refer to this character as Bruce Wayne. Hardly ever is he the day to day figure walking about this depressingly designed Gotham. Bruce Wayne is basically nonexistent, hence the title. The Batman (Robert Pattinson) is in the inception of his vigilante alter ego, enjoying the cautious trust of police chief Lt. James Gordon (Jeffrey Wright) and the fear invoked when his symbol ripples through another rainy night sky. The possibility of him lives in the shadows even when he’s not actually there lurking or hanging from the rafters. I’ve never seen this character on film this way before, so I understand the varied approach, but it’s never really engaging either. The Batman is far from the worst in the franchise, but it’s among the most boring. The characters are pawns with little play or personality, and even though all of the rooks and bishops and knights are at its disposal, it still hardly lets them dance across the board. The endgame is more of stalemate than a checkmate. That it inspired me to reference chess should say enough. 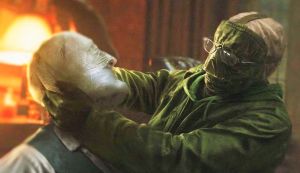 It’s unfair to compare The Batman to the most recent films by Christopher Nolan. He understood that what worked best was operating within the moral code of the character and showing how he must grapple with right from wrong, mildly or formidably challenged by his adversaries. This is a less experienced Batman, and so naturally he’s more prone to fits of physical rage, but the sleuth aspect goes totally unearned. It’s hard to take him seriously as a caped and cowled Sherlock Holmes when he misses clues, brashly jumps to thoughtless conclusions, and acts without explanation. Pattinson does his best with a Batman seemingly wearing one layer of personality beneath the synthetic suit and eye shadow he doesn’t want to shed, and Paul Dano doesn’t get much more to work with either as a version of the Riddler who’s basically Timothy McVeigh sporting glasses and a tech background and a whopping 500 followers online. The Batman overwhelmed me with the stunning cinematography from Greig Fraser and the pulse produced by Michael Giacchino’s walloping score, which helps explain why I was all the more underwhelmed by the flat characters. How do you make a nearly 3 hour long movie titled The Batman where Selina Kyle (Zoe Kravitz) is by far the most enticing option it has to offer? The script is too hit or miss to ever write home about. 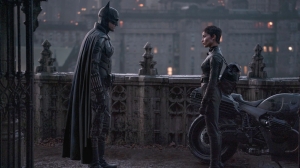 The production design, the stunt coordination, the teamwork that went into some of the best and most complicated shots we’ll see all year. Everything you expect to be impressed by on screen is there. Yet The Batman has all of the goods and delivers them in a package full of nothing of real import. I have hope for future entries from director Matt Reeves though, as trying to reinvigorate this character yet again is an impossible task to ask of any and all filmmakers, and because his new take of The Planet of the Apes started a bit bumpy with the initial entry as well. What Reeves did quite indelibly was to build and establish the world of Gotham in memorable ways we haven’t seen in live-action since Tim Burton’s films, and it gives what’s to come a place to really root in and potentially blossom. Maybe next time the characters will have as much to say as the stunning visuals.

“Together we will learn to believe in Gotham again.”