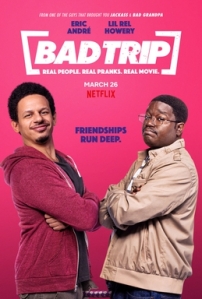 Outrageous, defiantly yet intentionally distasteful, and carefully crude all at the same time, Bad Trip is a candid camera endeavor fueled by heartfelt storytelling and blunt force trauma reactions to Eric André’s unique and often brutal brand of uncomfortable, curated, coercive brand of comedy. The film pushes the envelope, toes the fine line between gratuitousness and simplicity, and is the road trip bromance best suited for 2021. Bad Trip is fairly forgettable when it comes to the narrative and yet I doubt I’ll howl louder at a movie by myself for the rest of the year. I might not remember most of it, but I know I cried from laughter.

Besides the conceits of some of the on-camera pranks (the best bit at a zoo reaches temp, boils over, and practically spontaneously combusts), not much about Eric Andrés typically shocking brand of comedy feels all that shock worthy in this film. He plays Chris, an erratically employed loser whose flatlining existence gets a defibrillator jolt to the chest after running into his old high school crush Maria (Michaela Conlin). He sees it as fate spinning wheels or maybe even plates during a balancing act, and his skeptical best friend Bud (Lil Rel Howery) isn’t so sure these two hermit hamsters are up for the adventure. Bad Trip is conventional in its plotting, and for my taste, a bit too intentionally dated with its gimmicky, Jackass spinoff design. It definitely works though.

This is a comedy of different sorts – at most times a comedy of errors and during a few moments one of manners – and the surprising linchpin throughout is Tiffany Haddish as Bud’s older and bullying sister Trina. She’s solid in the scripted bits, great during raw improv, and is so much more tame than most of her recent acting gigs. The film is so smothered and scattered and covered that it requires a little backbone, and Haddish keeps this ambitious idea from sinking during the many segue moments. She doesn’t get the biggest laughs, but I’m not so sure the movie would’ve held together without her either. 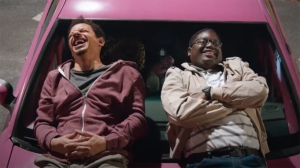 Told in the same throbbing vein as Dumb & Dumber meets the candid camera hijinks of the outrageous Borat endeavors, Bad Trip is both a buddy road comedy and an intentionally mean, calculated, physical expression of inner emotions. The movie – no matter how absurd and silly it tends to get – conveys the honesties at its core to the best of its limited abilities, and while it might be as fancy as a county fair corndog, Bad Trip is still worth the price tag for the familiarity and the friendship alone. That it bowled me over is just the icing on top of this funnel cake of a film. It’s funny, salty, dizzying, and will leave your stomach in easily untied knots.

“Gotta fake it till you make it, right?”