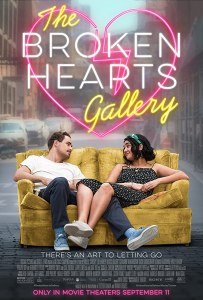 Sometimes you watch a movie and can tell everyone involved just had a blast in the process of making it. That they had fun and genuinely like each other when the cameras aren’t rolling. This usually only applies to comedies for obvious reasons, and it doesn’t necessarily mean the film itself is great either. But The Broken Hearts Gallery is one of the few examples of late where the good times had on set infectiously translated to the screen, infusing the audience with a much needed sense of camaraderie given the state of the world. It may come up short of being great, but this one’s pretty damn good.

Everything starts with a brief scene from 8 years prior, with three friends huddled around together on the bedroom floor. Our leading lady is Lucy (Geraldine Viswanathan), all too familiar with the great equalizer known as heartbreak, and who collects souvenirs from past relationships. Amanda (Molly Gordon) is cold and cautious but caring, and Nadine (Phillipa Soo) is sympathetic because she’s made so many past flings feel the same aching pain. Flash forward to the present and Lucy seems to be living her best life. Dream job at an established NYC gallery, dating a mature guy named Max (Utkarsh Ambudkar), sharing a cozy apartment with her two best friends. What could possibly go wrong? Turns out the answer is all of the above. As seems to be the case for most hoarders, every party of life has get messy before things can get cleaned up. Lucy is no exception.

It shouldn’t be a spoiler to anyone who’s seen at least 5 romantic comedies that Lucy loses her job, her relationship, her confidence. It’s pretty textbook stuff. But then a few too many tequilas lands her in Nick’s (Dacre Montgomery) silver Prius, drunkenly mistaking him for her ordered ride home. There’s a softness to the empathetic Nick though, causing him to play the part she needs on the worst night of her life. He doesn’t want to take advantage of her; he just knows how it feels to be hurt. They keep running into each other though, and this truly serendipitous friendship blossoms into a partnership. Nick is struggling to open a chic hotel, Lucy unintentionally starts “The Broken Heart Gallery” gathering the sentimental souvenirs of strangers (why her exhibit and the film’s title don’t coincide literally made me dock .5 points out of the sheer frustration). Maybe the two creatives can become one. And I mean that in more ways than one.

The friendships crafted and directed by Natalie Krinsky are believable but a bit too exaggerated. The is romance grounded yet covered in corny, self-effacing grand gestures of love. It all feels so scripted. That it works is a testament to the performances from two convincing Aussies playing the roles of Americans so obviously in love despite their ability to say it or hear it. Despite some awkward expressions in the third act, I’m convinced that Viswanathan is a rare star who can kill comedic beats and nail dramatic scenes; she has that inexplicable it factor. We’ll be seeing plenty of her in the future. As will we of Dacre Montgomery, who most people likely associate with Stranger Things, which makes it all the more baffling to me that Sony didn’t sell this movie off during an ongoing pandemic. They would have made more money selling the film to a streamer and it would have been seen by more people. That’s a definitive win-win. But they took a risk, and it’s a shame The Broken Hearts Gallery will likely be forgotten in the long run. It’s winning, flawed, and charming enough to infinitesimally win us over.

“Here’s to finishing what we started.”