“We fight for what we think is right.”

One of Netflix’s strongest original films so far this year and one of the very few overall which actually demands a proper sequel, The Old Guard blends high octane action with an irrefutably original concept to great, lasting effect. It’s inherently campy because it’s based on screenwriter Greg Rucka’s own comic book series of the same name, and it’s grounded by the unlimited and talented direction from Gina Prince-Bythewood, who apparently can handle violence as well as she can romance and melodrama. I wouldn’t be the least bit surprised is this apparent one-off endeavor turns into a successful franchise for the streamer down the road.

I like when an action/thriller wastes little to no time, plopping us into a world rather than teasing it out, and The Old Guard does just that. But the film doesn’t give everything away either, showing enough finesse to establish rules without formally introducing us to those forced to live by them. They are the eponymous group, a mystical and immortal quartet dated back more centuries than most would find to be a practical guess. Led by the elder Andy (Charlize Theron), the mercenaries utilize their skills to impart good and to dispose of the waste at their own discretion, using years of wisdom and battle-tested foresight to decipher right from wrong and the innocent from the guilty. It feels natural that we find them at an impasse during the information age; their oath of secrecy is not one sworn by all of those scanning the web. They’re finally vulnerable.

Andy’s right hand man is Booker (Matthias Schoenaerts), whose membership was followed by Joe (Marwan Kenzari) and Nicky (Luca Marinelli), two adversaries lifetimes ago who’ve evolved into life partners. But this Old Guard, battle worn and exuding chemistry in combat, find themselves in a sour pickle. They’re being hunted by the megalomaniac mad scientist Merrick (Harry Melling) with the help of Copley (Chiwetel Ejiofor), whose good intentions are overpowered by the sycophantic motives of those above him. Add in the existence of another immortal, a soldier named Nile (KiKi Layne), and the group is made to adapt by adopting a new individual of their kind for the first time in literal ages. There’s more plot buried in here, but that’s for you to dig up and to discover on your own. That’s part of the fun. 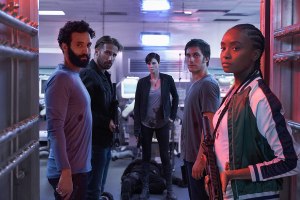 There’s so much to like about The Old Guard – the effortlessly mythical world-building, the wide range of styles within the tremendous fight choreography, and the progressive nature of the characters – that I almost don’t want to point out its three biggest flaws. Then again, I kind of have to. The first is in the form of yet another poorly written and lame antagonist, the second is a lazy traitorous act, with the third being the picture’s absolutely baffling musical choices. Especially concerning the last critique, I wonder what the movie might have been with a gifted composer instead of relying on throwaway crescendos and on the nose contemporary song choices. They aren’t unforgivable sins, but they occasionally are bad enough to require some form of penance, which is mostly made up by a story where time is both vastly indefinite and vaguely finite. The Old Guard ruminates on existence, slashes enemies with swords and riddles them with bullets, and throws in a few decent jokes for good measure. Are you not entertained?

“Just because we keep living doesn’t mean we stop hurting.”