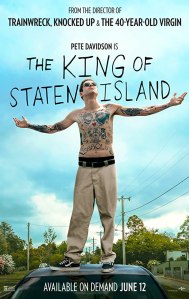 “Your work is mad inconsistent.”

More a string of half-baked, high-as-a-kite SNL sketches cut for time than it ever is a cohesive, insightful depiction of grief cloaked by the theatrics of comedy, The King of Staten Island has a story worth telling whilst having no idea how to properly present itself to the public. That seems to be a common concern for most modern comedies about new adults suffering from arrested development, and this one is done no favors by its wavering and entirely listless protagonist. This overlong film covers all the bases, and by doing so, is never really about any one thing either. It’s messy, sometimes sweet, so very confused, and is dressed from head to toe in hand-me-down tones of outdated and unfunny tunes worn to death by Judd Apatow.

Life isn’t as easy for the freeloading Scott (Pete Davidson) as one might assume. His physical health is poor, his mental stability is in even worse shape, and he’s comfortably stuck living at home with his widowed mother Margie (Marisa Tomei), a school nurse who also works in the ER. Meanwhile, Scott gets high on his own supply and shoots the shit, passing time by forgetting the clock altogether. He’s a basement dweller alongside his mostly shady yet loyal friends, all who champion his dreams of opening America’s first tattoo restaurant, and he’s a case study on how and why people get stuck in the where and the why of specific, traumatic, life-changing events. For him it’s the loss of his father, a firefighter who didn’t return home from a call. He’s a kid living in a man’s roughly inked skin. He’s lost and has no intent on being found.

The King of Staten Island is an absentminded film focused on a young man of the same accord, and in that regard it actually makes sense that the movie’s blinkers are so damn bleary and blurred; a few early morning eye rubs on Scott’s behalf can make it see more clearly but he prefers a scattered outlook. Scott has a very rough relationship with his more ambitious and more collected sister Claire (Maude Apatow). He’s a major dick to Kelsey (Bel Powley), the girl he’s happy to hook up with but can’t commit to. His stoner bros question his allegiance during a theft. The story of this so-called “king” is all over the New York map, and it’s all too obvious that the script doesn’t have the awareness to pin the corners before exploring the juicy middle. The King of Staten Island is about Scott, but unfortunately he also happens to be one of its least interesting characters.

A more than welcome breathe of fresh air puffs its way in with the hardass presence of the mustachioed Bill Burr, a separated firefighter with kids of his own, and a man who sees potential in establishing a new life with Margie. Burr is a very raw actor, but he’s vastly more believable and better than Davidson, who’s so connected to the material that it can often be misinterpreted as a disconnect; it’s obvious this story is personal, but it doesn’t come across that way. The King of Staten of Island doesn’t dissect its title until Burr enters – and, for that matter basically steals – the entire picture, because only then does the film even consider being about any one thing in particular. He shares a few tremendous scenes with Davidson which resonate deeply, and yet they’re in service of a story with no real stakes or consequences. Scott lacks purpose and so does this film. 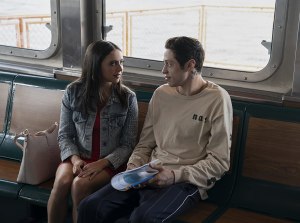 Time and time again, I find myself frustrated by Judd Apatow when he gets behind the camera. It almost seems that, with few exceptions, he’s simply better at identifying talent and producing projects than he is at writing/directing them himself, as is clear from start to finish with his latest piece of indulgence. This one desperately needed to be edited down to 2 hours at most, features poor character development early on, and showcases how an unclear script can make or break a movie before it’s even made. The King of Staten Island never quite finds its groove, embarking on one tangent after another, pulling off at every exit instead of getting where it needs to go. That’s not a problem when the sights and the people are interesting. It’s just too bad that’s not the case with this jester.