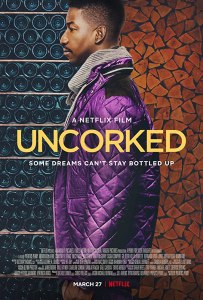 “It actually kind of helps when I think of wine like barbecue.”

Uncorked seems to be the byproduct of its indecisive protagonist, weighing his options between taking over the family barbecue stand or going after a dream he’s discouraged from pursuing. As such, the film meanders and dawdles around with parts stripped of passion, and those scenes make this streaming option’s run time feel longer than it really is. Having said that though, the tedious monotony from one side only accelerates and accentuates the fascination found in the other half, making for a fictional movie based in reality, and one that’s intentionally separated into two distinct factions. 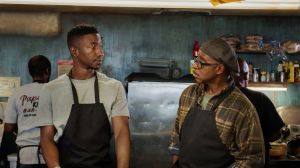 The tentative, torn leading man is Elijah (Mamoudou Athie, a promising actor with a calm demeanor, stoic sound, and a cadence all his own). He’s happier working at a local liquor store, selling bottles of wine through descriptive stories and curating the monthly wine club program alongside his boss Raylan (Matthew Glave). The rest of the time, Elijah can be found arriving late to the family’s generational barbecue spot, chastised by his domineering dad Louis (Courtney B. Vance) and welcomed without judgement by his understanding mother Syliva (Niecy Nash). Elijah doesn’t care about cutting ribs or ordering cords of wood for the pit; his internal fire is stoked by an interest in expertise, the science of corks, and knowing as much as he can about something he loves. 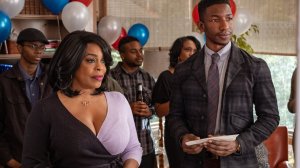 Elijah and Louis butt heads, as you’d expect. Louis just wants to pass down what was passed on to him. Barbecue is all he knows, and as is typical in a family business, it can come across as a burden fueled by self-preservation even when packaged as a gift. It’s no surprise that Elijah’s desire to pave a new path for himself – one of becoming a master sommelier – is met with dejected disappointment and frustration by his father, and I wish the film had spent more time exploring their dynamics throughout. Uncorked is a film about family and legacy, yet it gets more wayward and clichéd the further from the nest Elijah cautiously decides to leap. 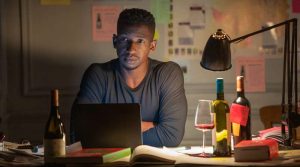 Elijah’s romance with Tanya (Sasha Compere) is wholly believable, even though it hasn’t been completely woven into the narrative. There are also the issues with Elijah’s time spent in Paris as an exchange student. The development simply isn’t there, the story line becomes confusing, and his friend Richie’s (Gil Ozeri, the cast’s weakest link) final standing literally makes no sense considering how incompetent the character was in the rest of the film. I believe this one would have been better had it stayed on the rich and colorful Memphis soil though, mostly because so many of the scenes there hit with the bass and the taste of life you expect from a place of proud people. It feels so authentic when operating in that pocket, and that’s a credit to writer/director Prentice Penny. A single dinner table scene – which, personally, I find to be one of the most difficult to make cinematic – shows that Penny has promise as a new filmmaker. Uncorked, more than anything, gives us a taste of what he has in store for the future. I know it’ll be better than this.

“I just wanna find my own thing.”