“Not too dangerous. Not too exciting.”

Thoroughly convincing yet occasionally too clichéd to take this biopic to the next level, director Rupert Goold’s admirable Judy nevertheless entertains at all costs, which holds true for both the starlet at its center and the movie itself. It’s compromised and confessional. Relatively light on story substance but deeply invested in one human’s tragic substance abuse. Saddest of all is that we’re led to believe this really is a microcosm look at the incredibly talented Judy Garland’s unhealthy relationship with fame and fortune and the annals of Hollywood, and how the star system shot her to fame with no concern for how fast she’d burn out. Don’t be fooled by the glitz and the glam. Judy is a tragedy.

For how conventional most of the movie’s square yardage feels, Judy at least has a surprising entryway for us to walk through. The fresh-faced teen Judy Garland (Darci Shaw, a confident and promising young actress utilizing vulnerability to portray an icon), will do anything at her big screen test for the role of Dorothy in The Wizard of Oz. The rest is history. But it’s an important creative decision on behalf of screenwriter Tom Edge (working off of Peter Quilter’s stageplay) to ground the showy drama with a seed of intense childhood trauma. When the picture leaps forward to the encroaching twilight of Judy’s (now Renée Zellweger) tumultuous career, we’re unsurprised to find her looking so frail and so very wan. She’s been the show pony in this race for a long time, and Judy endearingly depicts her last go of it while she still physically and mentally can belt out the hits before collapsing. She obliges because it’s all she knows. Her show – her life – must go on. 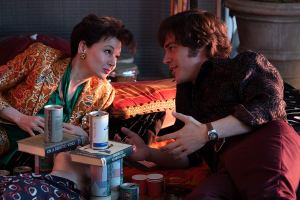 While they’re definitely integral to the story, I never felt connected to the men in Judy’s clutch. She fights with her ex Sid Luft (Rufus Sewell), the father to their two children who wants sole custody. It’s torturous on her behalf but we can’t really blame him either. He lives a comfortably shaken and stirred life while she’s on the down and out, often served on the rocks. There’s also the matter of her late fling – and temporary marriage – to Mickey Deans (Finn Wittrock), a man much her minor who similarly indulges in her self-detrimental vices. These men, as well as the children, are so important to Judy’s life story and yet they’re merely given a single verse in an album full of hits. There’s a solid supporting cast here, but too often are they’re background singers instead of accessible role players.

Thank goodness for the aggressive, observed, soon to be Oscar winning performance by Zellweger. There’s so much deeply nuanced sadness behind her watery eyes and vaudevillian gestures, especially given how Zellweger inhabits the role without making it a broad, sweeping characterization. Judy only ever got to play the role of Judy no matter the number of credits she amassed, and it seems as though Zellweger, herself a ripe target for the tabloids and mainstream media, empathizes with the late great’s pressure to perform without the confidence expected of the headliner. So while the film doesn’t seem interested in digging to depths of a picture like La Vie en rose, it still holds up a flickering candle to reveal a solid and sobering bookend to Garland’s own 1954 version of A Star is Born. That she played one role on-screen and eventually became the aged, addicted protagonist off it is a sad bit of poetic fatalism. And in that regard, Judy – for all of its minor issues – attests that fame and fortune is not all it seems.

“It’s your job to give those people dreams.”