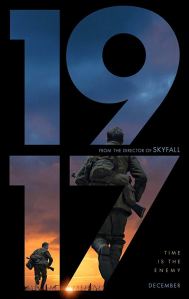 “You think you can get there in time?”

A technical marvel with its heart and soul sealed inside a locket for most of the duration, 1917 tells a familiar WWI story with great ambition and stows its humanity away in favor of action, almost to the point of hiding what it means to be a person. Such is life in and at and with war, I can only suppose. And while1917 lacks the three-dimensional aspects of Christopher Nolan’s masterful, time-jumping Dunkirk, director Sam Mendes’ epic follows a more myopic and thin red line, designed to put us through the terrors and trials of the trenches and the sleepless hours of those forced to fight yet another & otherwise meaningless war. 1917 looks the part, and more importantly, it feels as such. The opening wrestles us awake. The ending grants us a peaceful respite.

Lance Corporal Schofield (George MacKay, a remarkable newcomer whose name you’ll hear for years to come) sleeps against a tree’s trunk. Beside him is Lance Corporal Blake (Dean-Charles Chapman), a fellow and less experienced Allied soldier, awoken with orders to pick a comrade for a mission. Of course he chooses the man to his right, even if Schofield isn’t his right hand man. 1917 is, at least in this regard, a rather primal and basic war movie. Only a few characters drive the plot. There’s an ultimatum and a goal. The enemy isn’t across the lines of no man’s land, but is more the ticking the clock and the detours along the way to the final destination. And that’s because Schofield must accompany Blake to relay orders to cease an attack so as to save more than a thousand of their own men, including Blake’s brother. Every second counts.

Over the course of the film we come across high profile movie stars (including Colin Firth, Andrew Scott, Mark Strong and Benedict Cumberbatch) playing high-ranking officers hiding out in trenches and burrowed bunkers. They’re all rather inconsequential characters though, serving more as candlewick conduits to keep this harrowing story burning and aflame. 1917 is a movie about plowing forward and pushing through, and like the battleworn men that they’re depicting, the four encourage the two to keep going no matter the opposition. There’s so much perseverance, trust, and sacrifice on display in 1917. The costs of war here aren’t just price tags…they’re actual people. We feel and know and actually read the terms and conditions of life. How they change without our control and how we must accept them to continue on. It’s part of the process.

I’ve read and I’ve heard so many people critique and belittle Sam Mendes’ 1917 because of and for its faux one shot approach. I won’t be one of them. This is not the social commentary of Lewis Milestone’s 1930 picture All Quiet on the Western Front, a film I watched as a teen from the comfort of the futon in my parent’s lake home, and one that still resonates with me almost 80 years after its release. It isn’t as disillusioned as that film, nor is it as hard or as austere as Stanley Kubrick’s more conventional approach with Paths of Glory. 1917 tells a 100+ year old story with timestamped clichés and the kind of technology that these soldiers couldn’t have fathomed. It might seem like a gimmick, but the gimmick is designed to put us in the boots of men we’ll never meet and who’s glorious paths we’ll never cross. It’s an experience.

1917 feels like a nightmare brought to life. Like a great war epic blended with the trapped, inescapable, nightmarish tones of a classic The Twilight Zone episode. One which transports those of us in the audience to muddied battlegrounds and forces us to fight beside strangers for something we don’t really understand or even believe in. Such is the way of too many a soldier. And while the film highlights the typical, stunning topography of Roger Deakins’ cinematography and is elevated by the swelling, often symphonic score from Thomas Newman, Sam Mendes’ 1917 stands out as one of this year’s best achievements because of its modern vision of old, iconoclastic, necessary ideals. That we should be careful with our trust, that we should be judicious with our steps and never too cautious with our allies, and that – especially in this setting – the tortoise can beat the hare when the latter snags tripwire. 1917 doesn’t disappoint on a sensory level, and it’s surprising how well this story develops and handles its own fleeting mortality, ending in a place similar to where it started but with a new and deeper and richer sense of gratitude. This it what it looks like when ambition and history and art all collide as one.

“There is only one way this war ends – last man standing.”