There’s a nostalgic, practically immediate red & blue siren response that comes from hearing the Cops theme song and seeing a long dead film property resurrect from the grave, and to prosper once more like a phoenix rising from its very ashes. With gunfire and flames and grenades, Bad Boys for Life definitely leans hard into the latter category, and yet the actioneer also feels surprisingly surface level. This is a family driven picture that’s full of uninspired set pieces and hokey dramatic contention. Bad Boys for Life may be an entertaining popcorn flick for those familiar with the series, but that doesn’t necessarily equate to a good film either.

Bad Boys for Life is at it’s best during the few situations throughout which mirror the absurd open. Mike Lowery (Will Smith) drives his partner and spiritual brother Marcus Burnett (Martin Lawrence) through the busy streets and tourist filled beaches of Miami, in hot pursuit of the hospital where Marcus’ first grandchild is about to be born. It’s a fun juxtaposition, watching these men reckon with the hands of time, as well as seeing how they’ve changed – Marcus willingly and Mike resentfully – since we last saw them team up on screen. The God-fearing Marcus sees this as a door to a new retired life that he must walk through. But after an assassin shoots at Mike during a drive-by murder attempt, the detective only delves deeper into the string of connected cases, much to the chagrin of Captain Howard (Joe Pantoliano).

Mike resorts to his old bad boy ways investigating his would be killer. Marcus entertains the La-Z-Boy lifestyle at home. Shit hits the fan and hilarious editing leads to them both begrudgingly agreeing for one last ride. And there’s fun to be had in the movie’s mushy middle. I most enjoyed how co-directors Adil El Arbi & Bilall Fallah’s picture introduces us to and reluctantly shakes hands with a new generation of detectives – all with distinct personalities – while maintaining a reverential tone and visual aesthetic in accord with what Michael Bay had established years ago. This is as much of a new chapter as it is a legacy entry. It’s somehow energetic and lazy. 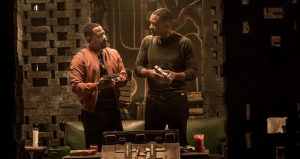 Smith and Lawrence haven’t missed a beat in terms of chemistry, and it’s actually quite fun to watch two comedic heavyweights banter about the banalities of old age with the attitude and the action of men their minor. And yet that’s part of the reason why I regrettably have to give two thumbs down for Bad Boy for Life. This film champions its heroes without setting them up for success in the long run, tears into its antagonists without giving them a platform to prescribe their hateful intentions, and is so lacking in tone that most of the picture rarely ever registers. Bad Boys for Life is driven by star power and is held back by easy, piddling, simple-minded writing. I couldn’t have cared less about what these boys were going to do.

“Ride this thing till the wheels fall off.”