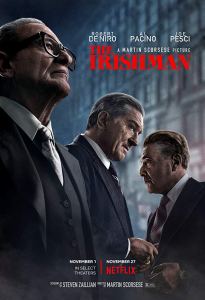 “You don’t keep a man waiting. The only time you do is when you want to say something.”

As an uneven, idle drive down a hitman’s memory lane, The Irishman at the very least accomplishes – and largely adheres to – the languid and methodical tone established early on, adopting the long-winded and cross-cutting narration of a life story told by an elderly fellow whose mind has lost continuity. That man is Frank Sheeran (Robert De Niro), now in a retirement home recalling the sins of his life while randomly tracing the path he took to this final trajectory, and the film is every bit as wayward as you’d expect such a conversation to be. The Irishman is sprawling, detail-oriented, and an extensive history lesson full of solid performances. It’s also among the most disappointing films of 2019.

I still don’t understand the happenstance structure of The Irishman. Perhaps the intent is, as I mentioned before, to sporadically recount events the way Frank’s aged mind pieces them together, but even then it’s still a road map with impossibly unpredictable directions; you can’t follow this route to its final destination. Always present in the picture though is Frank, spanning multiple generations and portrayed by De Niro at every turn. We see his curiously uncanny CGI evolution from a young soldier, to a meat supply driver, to a gangster working for Philly crime networks via Russell Bufalino (Joe Pesci), and eventually befriending and playing protector to Jimmy Hoffa (Al Pacino). Frank isn’t a good man, but he’s an honest one, and that character trait lines his pockets as the body count adds up.

The most obvious and discernible thematic element in The Irishman is one of grief – stemming from a life full of regret as well as the typical, multiple “what if?” ponderings that add up as age piles on – and Martin Scorcese takes the long way to arrive at these clear-cut, easily broken and crystalline conclusions. Like all of our lives, incalculable amounts of the visual and narrative landscape of this picture are dedicated to people and places and events which rarely ever register with the audience or really change the main characters personally, but they still have a key role in unknowingly altering an individual’s outcome. I think that’s the complicated and flawed beauty of The Irishman; I just wish that it had a better way of communicating its incriminating messaging and cold sentimentality.

The Irishman is so similar to Sergio Leone’s Once Upon a Time in America, in that both films are intentionally long and specific white-picket fence sagas with a penchant for nostalgia, fulfilling a craving for time capsule information that most of our current youth would likely look up on Wikipedia if not for this opportunity to see history in the flesh. That’s such a very powerful thing. And like Leone’s epic, both films fondly relish in the present and resent the bitter cold of the slowly dimming light at the end of the tunnel. And par the long course of Catholicism, The Irishman – from Baptism into the game, Confirmation through forced action, and Marriage with a very intentionally placed ring – always registers the weight of its religious convictions. Unfortunately I can easily imagine this movie being cut by an hour and still accomplishing the same goal. That it’s this sorely overlong and rarely ever boring is as much of a critique as it is a lukewarm commendation.

The Irishman isn’t a bad film, and at this point in his storied career, I’d argue Martin Scorsese – one of cinema’s greats – is actually incapable of making anything below average. But at the same time, The Irishman just feels like a clunky rehash of all the gangster films he’s made before. Robbie Robertson’s dull score doesn’t elevate the picture, Thelma Schoonmaker’s typically pristine editing makes bizarre choices, and the main performances seem to be missing soul. Only making matters worse is the suspect – and incredibly overpriced – use of de-aging CGI technology for the trio of Scorcese’s frequent collaborators. There are moments where the trickery works, yet far more often than not it looks as though you’re watching a video game character (with blurred motion, awkward coloring, and no grasp of how to animate the movements of a human being’s mouth) interacting in the real world. I have a feeling that stronger character development and extensive make-up/prosthetics with age appropriate actors for each time period might have been the better and cheaper approach. But when Netflix willingly writes a blank check for a film that requires what the wealthy might call “F*** You Money,” you’re able to do as you please. The Irishman doesn’t compromise its vision, working for and against the picture in equal measure.

“I just don’t know what happened.”