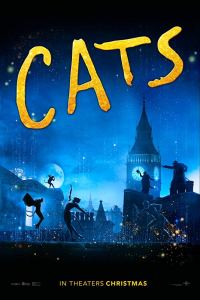 “Oh no, look what the cat dragged in.”

Cats is the kind of film that honestly makes me curious as to what mass audiences 10 years from now will make of it madness compared to the vast drubbing from most contemporary critics and the almost entirely negative general opinion. And I say that because I believe this Broadway musical adaptation to be one of the most ambitious, oddly inventive cinematic experiences of 2019, as well as also one of the worst movies I could imagine seeing in the span of nine lifetimes. Cats’ unusual imagery quickly gives way to visual boredom and tedious storytelling, and the result is the loudest yet most voiceless picture of the year. I can’t believe this nightmarish, Frankenstein fever dream garnered the financing to electrocute itself into being.

I have to admit that it feels practically impossible to not be intrigued by the initial lure cast by Cats. We’re like starved fish hungry for something new, so while it’s perplexing and confusing and tasteless, we still bat our eyes in wonderment at something we’ve never seen before. This bamboozling beginning centers on Victoria (the lauded ballet dancer Francesca Hayward), a female feline thrown to the curb and left to fend for herself. She’s surrounded by the Jellicles – a clowder of various species of street cats – who introduce her to a feral existence through song and dance and a curious obsession with all things reincarnation.

Undoubtedly ambitious yet an undeniable monstrosity, Cats only clicks when it ditches the furious and furry dancing for the more dramatic moments. Even then though, I found it nearly impossible to get over just how insane these characters looked, and how their freakish centaur qualities are meant to be taken quite literally and seriously. Perhaps that is the pernicious, calculated mannerism of some cats. Or maybe Cats is just an ill-conceived film, telling a broad story that’s happier to explore the common characteristics of different breeds instead of really honing in on the protagonist Victoria’s recent abandonment by her owner. It’s all hoot and holler and bet your bottom dollar for nearly two indeterminable hours, all without a care in the world.

Featuring declawed drama, a lazy villain in Macavity (Idris Elba), and borderline insane set pieces, Cats comes across as the kind of deep sleep REM dream a kitten might conjure up while under anesthetic for any number of procedures. It’s phosphorescent in color, peculiar in perspective, and is somehow both the busiest and the most boring film of 2019. Director Tom Hooper’s most recent effort is a quizzical pop-up book full of water-color renderings desperately trying to tell T.S. Eliot’s tale with a modern flare, and it’s a film that was bound before it was finished or ever appropriately realized, making the pages bleed through from front to back and washing away any possibility of textual substance. Cats is a groundbreaking jack of all trades on paper, is quite perplexing at first look, and becomes a monotonous master of none after 10 minutes of trepidatious choreography and indecipherable lyrics. What a woefully playful and incredibly tone-deaf hairball of a movie. Get up and go to the bathroom anytime you please. You won’t miss a single thing.

“Cat got your tongue?”