“Nothing here is for children.”

There’s pretty much nothing to like about Playing With Fire, an absolutely bizarre PG rated romp that feels the need to try to sneak in adult material, and it’s the kind of disaster which can’t be saved by the talents of those involved. It’s a mess from start to finish, a travesty from top to bottom, and may very well be the worst, most monotonous movie of 2019. Watching Playing with Fire feels like being stuck behind a student driver during your commute home from work. You appreciate the learning experience being taught, but at a certain point you have to blow by in the left lane out of pure frustration. I can’t believe this junk – which is straight to VOD quality at best – weaseled its way into theaters.

Doing his best to imitate Arnold Schwarzenegger’s standoffish and callous performance in 1990’s Kindergarten Cop, John Cena somehow strangely comes across as a complete phony. As Jake “Supe” Carson, the leader of a small group of smoke jumpers (who are, said ad nauseam, quite different than firefighters), Cena plays the no nonsense brute. Because his father worked in the same field, Jake feels like he has a legacy to uphold, hoping to fill the shoes of the soon to be retired Commander Richards (Dennis Haysbert). But a rescue mission finds three children in the crews lap when Jake desperately tries to show professionalism. Antics and fart jokes and chaos ensue. 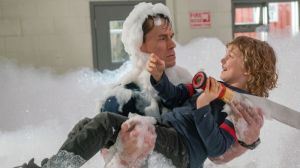 Brynn’s (Brianna Hildebrand) the oldest of the siblings, carefully trying to hide just how they ended up alone in a cabin on fire. There’s also Will (Christian Convery) who has a penchant for destruction and the hysterical crier Zoey (Finley Rose Slater). Every now and then Jake’s one-time love interest Dr. Amy Hicks (Judy Greer) pops up in the picture, mostly when the robotic Supe struggles to show basic human emotions. Slathered in is plenty of simplicity with the remaining characters: Mark (Keegan-Michael Key) plays the loudmouth, Rodrigo (John Leguizamo) messes up famous quotes, and the towering, nearly silent Axe (Tyler Mane) quite literally always carries an axe on his shoulder. The final product – which this is more than it should ever be called a film – is about as bad and uninteresting as it sounds.

Like if 1987’s Three Men and a Baby had been invited to the Nickelodeon Kid’s Choice Awards, loaded up on caffeine and then showered in that infamous green slime, Playing with Fire is entertainment of the lowest level. One scene features Brynn questioning Supe’s use of the acronym FUPA (here meant to be “fire utility pouch apparatus”) for his fanny pack, when it’s clearly implied she knows the more explicit meaning. Another finds Supe, fending off the nuclear smelling feces of the youngest while trying to wipe her clean. And guess what? The diarrhea gets sucked up an armhole, covering his masked face with baby poop. Ironically, that unforgivable moment quite literally explains what it’s like to watch the deplorable dumpster fire that is Playing with Fire. No amount of matches can mask this level of stink. Even Smokey Bear would advise you to let this one burn to the ground.