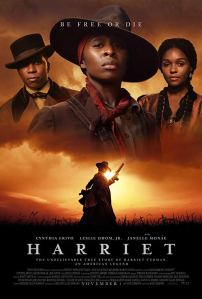 “Fear is your enemy. Trust in God.”

Not much about Harriet was first-time news for me. She was the subject of a grade school report I wrote as a pre-teen, and my OCD led me to check out every book which featured her name, reading the same biography a few times over during multiple late nights. And how I interpreted the story then – more as a school assignment than a glimpse into the mind and the heart of one of America’s most profound figures – echoes just how rudimentary and bland this feature film comes across. It’s a decent history lesson, acted with edge but told with little to no verve, and Harriet is a call and response hymnal lacking the communication for audiences to reciprocate the cries. The film’s pain, like Harriet, is pushed into the margins and the voids. It feels and looks like a costume drama. 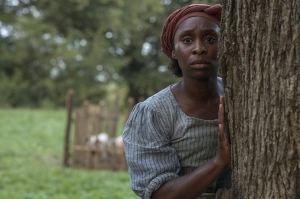 Outside of the dedicated lead turn from Cynthia Erivo as the titular and headstrong abolitionist, relatively little about Harriet registers as anything more than staunch and stodgy. The confusing visuals – trying to play on the Harriet’s struggles – flip between being ghostly and pallid to overly saturated. It’s scored by Terence Blanchard with enough brass to sound like an off-brand ripoff of a James Horner tune, and the production design looks every bit as expensive as an early 2000’s TV version might’ve cost. Which means Harriet immediately starts in a place of disadvantage, making sense with the story but only further hindering how quickly the movie can jump out of the starting blocks. Unfortunately, even when it hits its stride, Harriet does little more than crawl. This is an indeterminable marathon run by a klutz. The effort and the distance don’t make up for the repetition of it all. 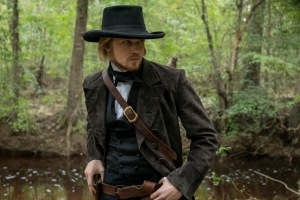 Anyone who’s ever cracked open an encyclopedia or clicked on a Wikipedia page or memorized a high school study guide should know the basics about Harriet Tubman. And I think that’s where I most take issue with writer/director Kasi Lemmons’ adaptation of the historical figure. The film bears her new name after fleeing and fighting her way to freedom, but it doesn’t take the time to understand such a seemingly pivotal decision. To linger in the quiet moments instead of consistently driving forward with reactions driven by actions. We also meet Gideon Brodess (Joe Alwyn), son of Harriet’s slave owner, and he shows an affinity for the woman. The gross relationship isn’t given life outside of spending too much time developing Gideon into the hedonist we already know he is. It’s one thing to humanize hatred as was so elegantly done in Hostiles, but Harriet more or less belittles the hate to the point of irrelevance. As an outsider looking in, it often felt impossible for me to really understand the inner machinations and feelings of those being subjected to such disdain and unholy cruelty. Too much of the evil occurs off-screen. 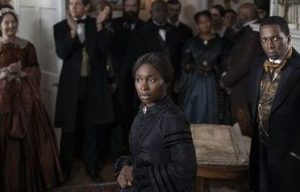 Harriet isn’t the type of film that forsakes substance, mostly because it dares to try and condense such an important and wide-ranging subject into roughly two hours. But it’s just such a stale biopic, lacking depth or emotion, and scenes that should hit hard become mere pitter-patter because the script is always moving onto one thing after another. Harriet seems destined and practically made to be the next film show in high school history classrooms around the country, and while the the teacher’s pets in the front row will be engaged and taking notes, I can almost guarantee that the rest of the class will likely be sleeping behind their binders. And for those predicting a possible pop quiz, reading the plot summary before taking a snooze. They’ll miss a great performance from Erivo, but outside of that, won’t miss anything they couldn’t just read in a hurry and escape with an average grade. Harriet does the same.

“My people are free.”