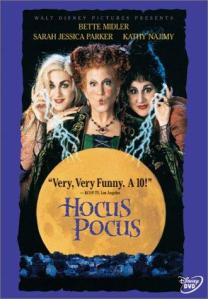 “So the legends are true.”

It’s baffling to think that Hocus Pocus, possibly one of the most definitive cult classics of all-time, didn’t make much of a splash during its initial release. Critics carved the movie through personal paper shredders, the picture’s theatrical run never recouped its overall budget, and strangest of all was that this touchstone Halloween treat was so strangely released in the dead of July. By comparison, I can’t imagine that a Christmas film would be any better of a sell in the middle of May. Yet not only does the film persist, it just continues to get bigger and to reach more people year after year. The spell Hocus Pocus casts is undeniable. 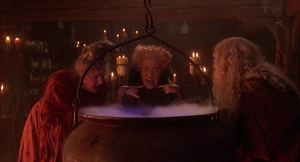 It’s easy to forget how dark the film’s opening is, descending on Salem during All Hallow’s Eve in 1693. The Sanderson sisters, old and withered and hunched, seek the kind of rejuvenation you can’t achieve through a modern skincare line or a botox injection. They wish to be young and vibrant and attractive. The trio’s leader Winifred “Winnie” (a game Bette Midler) brews the de-aging elixir, Mary (Kathy Najimy) sniffs out victims like a hound dog, and the trollop Sarah (Sarah Jessica Parker) lures the innocent victim Emily (Amanda Shepherd) into the woods with a sultry “to Grandmother’s house we go” melody. Big brother Thackery Binx (Sean Murray) tries to save his little sister, only to earn a life sentence as a black cat, and serves as the segue between the past and the present. 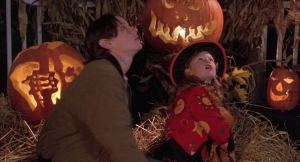 Cut to 1993, with enough time taking place in between for the legend to be parlayed and told in the classroom as a fabled folk tale. Max Dennnison (Omri Katz), a recent and reluctant transplant from Los Angeles, isn’t buying what this new town is selling. His clever classmate Allison Watts (Vinessa Shaw) undermines his skepticism, and as you might expect, the interaction gives way to cautious flirtation. Back at home though, Max has to deal with little sister Dani (Thora Birch), taking her trick-or-treating while their parents go partying for the night. The siblings navigate the brainless bullies Jay (Tobias Jelineck) & Ice (Larry Bagby), stumble upon a stuffy party thrown by Allison’s wealthy parents, and the three end up at the old Sanderson house for a good spook. And wouldn’t you know it, a virgin trying to impress a pretty girl just so happens to light the black flame candle, bringing the witches back from the dead. 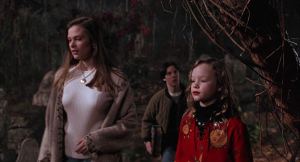 Once it makes the 300 year leap to the time the film actually takes place, Hocus Pocus briefly begins to feel very stale and formulaic, sticking to the same shtick most 90’s movies refused to stray away from. Thankfully though, like a bolt of lighting shot from Winifred’s fingertips, the Sanderson sisters bring a spark to the endeavor, as well as a hilarious fish out of water element. Most of the laughs in this film, of which there are plenty, come from witnessing powerful witches fooled by their own obliviousness to contemporary culture. A lighter and fire sprinklers trick them, as does a paved road, and they’re even thrown off by “The Master” (Garry Marshall), a man dressed as Satan while passing out candy in his suburban home. That’s the clever juxtaposition the film makes: Thackery couldn’t save his sibling back then, but maybe Max can use technology to his advantage to (SPOILER ALERT) save Dani now. 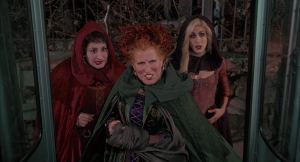 Not only does diving deeper into the plot of Hocus Pocus seem tedious, but pretty damn unnecessary as well. I’d venture to guess that this Dinsey classic is, quite easily, the most widely watched Halloween movie on an annual basis. At this point the heavy bulk of the population know exactly what happens, when things occur, how the whole drama comes to an end. Anymore, the what about the film is a whole lot less interesting than the why of it all. I think that’s why Kenny Ortega’s movie is so continually revisted, and explains why it’s such a towering and exemplary fixture in the diet of Halloween consumerism. This movie sells itself well and it gives you just as much in return. 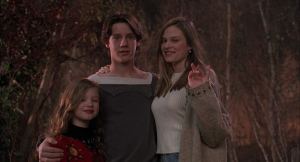 Admittedly though, sitting there with my notepad and a ready pen, Hocus Pocus didn’t hold up as pristinely as I remembered. A few scenes (specifically the abrupt song performance, the high school death trap, and the terrible car escape) come across as inorganic, plus the whole emphasis on Max’s virginity and the sexualization of Allison is all too telling that this one was solely written by men. However, I will say that most of the effects have aged surprisingly well, especially the talking cat Thackery Binx (voiced by Jason Marsden) and all of the practical wire work while the witches fly overhead in the graveyard sequences. It looks real, convincing, and fairly creepy because is it is, especially in the form of Billy Butcherson (the ornately disguised Doug Jones). I have to believe that’s why the film endures to this day. Hocus Pocus is a fun spook show, an iconic movie in its own right, and earns its place in the Halloween Hall o’ Fame. I wholeheartedly believe it’s one of the most rewatchable films out there. Seems like the vast majority would agree.