“Why are you so obsessed with Halloween?”

If I’m being honest, Halloweentown reminds me a lot of candy corn. It’s not a great piece of candy, nor is it one trick-or-treaters vie for during their neighborhood rounds come All Hallows Eve, but both are deeply nostalgic. Most people don’t reach for the bowl full of the tri-colored, waxy treat, but just seeing them there brings comfort and helps to establish a certain sort of seasonal feeling. Disney’s TV movie Halloweentown does the same, and its vivacity plus its overwhelming sweetness makes for a movie deserving of its childish, cult classic status. I think most would label it a guilty pleasure, but what’s the point in criminalizing something you enjoy? That is, of course, unless your dentist is asking. 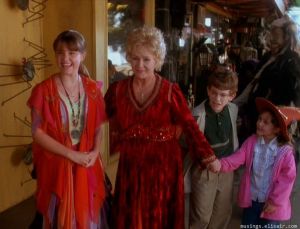 Because it’s a Disney Channel original film, and an early one at that, a lot of the faults in Halloweentown should be taken with a grain of salt. The opening feels like and even sounds similar to a carnival act, the ending is rushed without much reason, and yet the middle does a credible job building the kind of world that Halloween possessed children could only imagine visiting in their wildest dreams. Such is the case for Marnie Piper (Kimberly J. Brown), an October obsessive who’s not allowed the go door to door, neither are her siblings Dylan (Joey Zimmerman) and Sophie (Emily Roeske). Their single mom Gwen (Judith Hoag) refuses to celebrate the holiday, which explains why she’s jolted by the sudden appearance of grandma Agatha Cromwell (Debbie Reynolds). Something is up, and the kids pull back the curtain when they’re supposed to be asleep. Another world is merely a haunted bus trip away.

In a fun yet admittedly clumsy way, Halloweentown takes us on a ride that’s really no different than a big amusement park theme ride. And the movie is at its best when it ditches the norms of the modern world for an external place where differences become literally embodied by the many walks of life sauntering about in this evergreen theme of a town. But this is about as simple as stories come, which naturally makes us suspicious of mayor Kalabar (Robin Thomas), an old fling of Gwen’s and a character whose duplicity comes as no major shock either. Nothing original ever really happens in Halloweentown, and it’s a testament to the spirited tone and the bedtime storybuilding that this one continues to endure to this day. 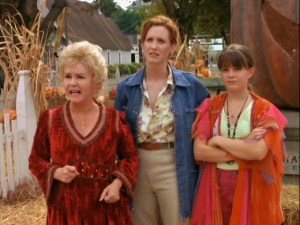 By channeling The Wizard of Oz while following multiple siblings possessing the power to pull the sword from the stone, Halloweentown feels like a Disney movie because it’s so obviously inspired by the many animated films that came before it. That does not excuse how fast the film forcefully concludes, or that the lazy antagonist is about as predictable as they come. But in retrospect, there’s plenty to admire about Duwayne Dunham’s film. So many classic, animated Disney movies are being remade as live-action efforts, and yet this one manages to have that old time effect told in a way that’s every bit as cursory as it is original. Maybe it’s the memorable name. Maybe it’s the simple set design and the unique costuming. Halloweentown isn’t a great film, but there’s something about it that undeniably sticks around in your mind the same way that candy corn sticks to your teeth. It’s hard to get rid of, and I don’t think it actually has an expiration date.