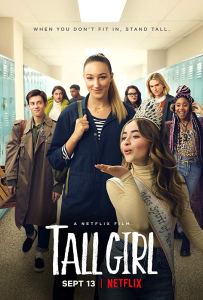 “I’m just gonna get my hopes up about happy endings in movies with actresses that are under six feet.”

While Netflix’s latest micro-budget production Tall Girl has good intentions, enforcing body positivity and squaring off against bullying, the horribly written film also has no idea how to approach those themes with an ounce of originality. It seems to have been penned by a socially “woke” adlib generator, born from the algorithms of the streaming service to ensure that the movie will get clicks and likes and shares. In that regard, the movie is mostly a success: I clicked the image, disliked the film, and now find myself sharing a review. But by almost any other measure, Tall Girl is a bona fide hot mess.

Jodi (Ava Mitchell), known as the titular Tall Girl to most everyone in her high school save for her lone friend Liz (Paris Berelc) and longtime admirer Jack Dunkleman (Griffin Gluck, clearly trying to channel an 80’s era Jon Cryer), never feels comfortable walking the halls in her size 13 Nike’s. She’s always the tallest girl in the room at 6’1″, mocked by classmates for something out of her control, and treated as a carnival attraction to cruelly mock. Jodi absorbs the mean jokes and wears them on her shrugged shoulders, slouching her way through each class period in an attempt to go unnoticed. But then the tall, beach blonde Swedish exchange student Stig Mohlin (Luke Eisner) walks through the doors, catching Jodi’s eye and lifting her chin. She has her first crush. 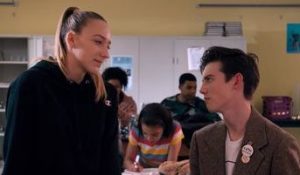 From its on the nose opening to one of the most contradictory endings I’ve seen in recent memory, the film invariably unfolds as a play-by-play of every single one of the most overused, insufferable tropes used you’re likely to find in every run-of-the-mill high school comedy. The mean girl Kimmy (Clara Wilsey) hides he own insecurities by snagging the hot new guy. Jodi’s sister Harper (Sabrina Carpenter) obsesses over beauty pageants. Their clueless parents (played poorly by Angela Kinsey and respectably by Steve Zahn) can’t find a way to connect. There’s the inevitable meet-cute between Jodi and Stig, the big fight with Liz, a hijacked first date and a big prom night speech. We’ve literally seen everything in this film done before, and needless to say, done infinitely better.

Sitting through Tall Girl, an average length movie that’s laughably serious, I couldn’t help but feel sorry for director Nzingha Stewart, her entire crew, and the cast (especially the vulnerable Ava Mitchell). It’s always painful to watch a film that’s been competently made suffer at the hands of a bad script – in this case written by Sam Wolfson – that’s dead from the neck up. This is the kind of movie where the lights are on but nobody is home. It has the vision to follow one young woman’s story of self love, yet it has the gall to undercut her entire journey with one of the most unforgivable, antithetical endings I’ve ever seen. Tall Girl wants to be a modern day take on The Elephant Man yet comes across as an even lesser version of 1995’s Angus. And that last moment – SPOILER ALERT – finds Jodi proudly wearing high heels, with the pipsqueak Jack Dunkleman, who carries his school books in a milk crate, revealing he did so for this exact moment, hoping to tower over his crush to give her a kiss. The nauseating script spends 90 minutes trying to battle relationship norms and to empower the lead character, and it literally ends by making her find great comfort in feeling small. And to quote the late great Stanley Kubrick, Tall Girl is further proof that you can’t polish a frozen turd.

“There’s just so many factors working against you.”