Maybe it’s due to the age of the characters. Maybe it’s because we can predict the kinds of hijinks they’re going to get into. Maybe it’s all hindered by my own experience growing up. Whatever the case may be, I couldn’t help but see Good Boys as a poorly executed and missed opportunity to marry adult filth with grade school innocence; to convincingly tell a crude story through the hormonal minds of three young boys. There are a few good scenes, some funny moments, and even a couple quotable lines. But all of that can’t keep Good Boys from feeling like another film’s prologue/flashback sequence that’s been drawn out to feature length. 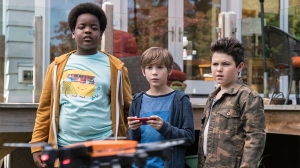 6th grade has plenty of ups and downs for “The Bean Bag Boys,” three friends who rarely branch out past their small stump. The plot is driven – or, more accurately, biked – by Max (Jacob Tremblay), a kid with a serious crush on Brixlee (Millie Davis). They haven’t talked but they exchange glances. Maybe she’s the love of his life? He seems convinced as such. Always by his side is Thor (Brady Noon), a talented singer who hides his passion with a tough guy attitude, as well as the ever truthful Lucas (Keith L. Williams), the tallest of the bunch who’s also a teddy bear with a gentle heart. Max gets invited to a kissing party, talks the cool kid Soren (Izaac Wong) into allowing his buddies to tag along, and their rocky journey to learn how to kiss before the end of the night leads to one hurdle after another. 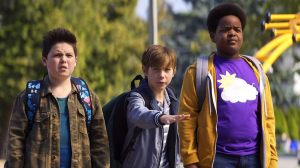 The biggest roadblock is Max’s older neighbor Hannah (Molly Gordon) and her friend Lily (a scene-stealing Midori Francis). Max uses his dad’s (Will Forte) work drone to spy on the girls, hoping to be taught a lesson in the art of swapping spit. The ladies hold the drone hostage, all while Thor steals a bag containing the hallucinogenic Molly that they need for a concert that night (I try to not nit-pick a movie’s logic to death, but that the girls can’t acquire drugs from anyone besides Hannah’s ex-boyfriend is rather stupefying in the modern age). This cat and mouse dynamic delivers a few funny one-liners and some nice physical comedy, but it becomes tiresome quite quickly. That the end of Good Boys works as well as it does makes me wish the story had simply fast-forwarded to the kissing party and shown more interest in exploring the brief period where these boys do or don’t begin to feel like young men. Where they try to figure out what it means to be a tween. 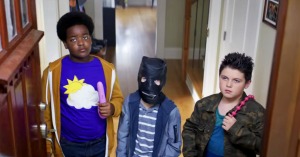 Sadly, Good Boys doesn’t try to be anything other than Superbad (that Seth Rogen and Evan Goldberg produced both is blatantly obvious) for kids who can’t even see the movie in theaters. I enjoyed the performances from the three youngsters, especially the range shown by Brady Noon, but the writing by writer/director Gene Stupnitsky and his co-writer Lee Eisenberg seems so beholden to the classic 2007 comedy that it doesn’t quite carve out its own place. Most of the humor is based on the boys being oblivious (as evidenced by the vulgar image above), and by them constantly talking in cheap malapropisms, such as confusing misogynist with a massage. I think people will enjoy the film far more than I did, as long as they’re able to look past what I found to be a tasteless pairing of subject and story. Lacking a style or a voice that demands a scribbled signature in the back of your grade school year book, Good Boys doesn’t leave a lasting mark. I struggled to find anything about it worthy of a superlative.

“I don’t think I’ve been this far from home before.”