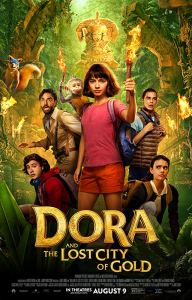 “Maybe a song will help.”

Unfortunately, the bad parts outweigh the good when it comes to Dora and the Lost City of Gold, a rather strange movie that seems to have its heart in the right place with none of the vision to get where it thinks it should be going. There’s great representation for minorities but little to no substance or area for them to explore. The film attempts an uncanny, self-aware spin on the animated source material without much cohesion or success. And the entire adventure just feels like a lumbering tight-rope act gone awry. Dora does a decent job attempting to honor its cartoon inspiration, but nearly everything else about it gets lost in translation. 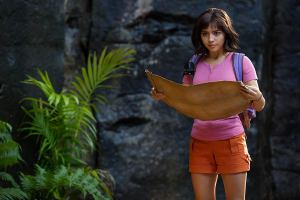 Much like the mixed-up emotions and awkward actions of its titular character, Dora and the Lost City of Gold doesn’t know which audience it should play to. The movie starts with Dora (Madelyn Miranda) as a child fascinated by the wonder of the outdoors, and who as a teen (infectiously played by a game Isabela Moner) is inspired by her adventuring parents Cole (Michael Peña) and Elena (Eva Longoria), two explorers in search of a city made of gold. They go missing and it’s up to Dora to save them, a task proving to be just as difficult as trying to safely navigate her way through the concrete jungle of high school. It’s a clever take with hit or miss execution. 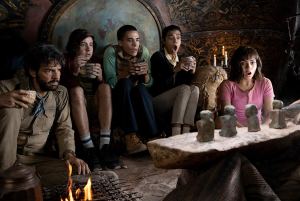 Things get better and hit closer to home the further into the jungle the film eventually journeys. Dora ends up there with her cold cousin Diego (Jeff Wahlberg), the know-it-all Sammy (Madeleine Madden), the doofus Randy (Nicholas Coombe), and a man named Alejandro (Eugenio Derbez) who claims to be friends with Dora’s kidnapped parents. The movie’s mildly entertaining in these segments, if a tad bland and rote as well, and the actors do a decent job of playfully selling the goofier aspects of the picture. It’s visually a lot like Jumanji: Welcome to the Jungle, except this one doesn’t pack anywhere near the surprising depth of that blockbuster hit. What you see is what you get.

I will say that Dora earns a few effort points for conveying a familiarity to those who’ve seen the groundbreaking cartoon, all while reimagining how the same premise might work with a teen instead of a toddler. But at the same time, and despite Moner’s best efforts as the lead, director James Bobin’s feature isn’t quite sure which crowd it wants to appeal to. There is stale teenage romance, improvised comedy, cheap CGI, action sequences inspired by Nickelodeon’s other property Legends of the Hidden Temple, and more than enough low-brow potty humor sure to earn some cackles from young kids in the crowd. Dora and the Lost City of Gold has all of these things, and what it’s sorely lacking is any sense of cohesion. Don’t be fooled…this one is made of pyrite.

“I don’t see any treasure.”