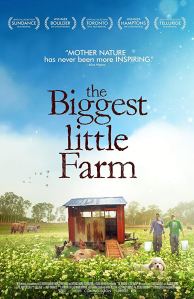 “It all circles back to the health of the soil.”

I’d say that main takeaway from the incredibly hopeful The Biggest Little Farm is that time and interest and effort can help bring things back to life. We’ve seen vinyl records make a resurgence in an era of music streaming. Meal delivery services are helping to inspire new home cooks shutter their dependence on drive-thru dinners in our fast food nation. Most Americans are being taught for the first time ever or are slowly relearning the importance of sustainability, and how our footprints aren’t magically washed away like those we leave behind during a walk on a beach. It’s a positive, necessary trend. The Biggest Little Farm practices what it preaches. 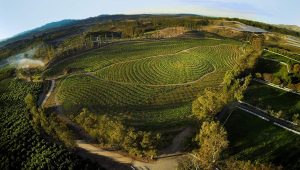 Set over the course of five years full of ecstatic highs and sobering lows, The Biggest Little Farm chronicles the journey of married couple John and Molly Chester. He starts out as a filmmaker and a wild life camera operator. She’s a food blogger with a limitless passion for health and wellness. Certain life events lead them to invest in 200 acres of desolate land in Moorpark, California, about an hour North of Los Angeles. The idea is to not just build a profitable farm, but to create a Garden of Eden, and maybe to find their purpose in this world in the process.

Although the narration by John Chester early on sounds a bit cloying and contrived, the picture nonetheless sways us with its charm and the pure devotion that these people put into their blind endeavor. The narrative is peculiar at times, oddly framing the Chester’s late mentor Alan York as a suspicious fraud, which he surely was not. And the whole documentary feels too distanced from the emotional toll that building a farm from scratch can take on all those involved. They’re all feeling these things when snails destroy fruit trees, when coyotes infiltrate the chicken coop, and when the dear pig Emma nearly loses her will to live. However, there’s very little time for the sentiments to set in; like life on a farm, the mourning phase is often cut short when a new problem arises just after the dust had settled on the last one.

It almost makes me think that The Biggest Little Farm traverses too great a swath of time to fully resonate on a personal level, but the overall result penetrates your being on a spiritual one. Unlike Disney’s latest live-action remake of The Lion King – a movie with a heart but no soul – this documentary shows us a true circle of life. One where death literally sprouts new life. Where hardships, when approached with grace and a positive mindset, can serve as fundamental life lessons. And where the fruits of your labor wholly depend on the amount of work you’re willing to put in. The Biggest Little Farm isn’t a perfect film, nor is it a great one. But it provides evidence that biodiversity among nature finds a way, and that since we are the hands sowing the seeds and casting the nets, we might be able to do so as well.

“Keep getting up and keep moving forward.”