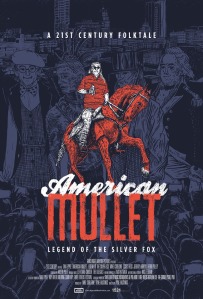 [American Mullet: Legend of the Silver Fox has its world premiere July 15th, 2019 at the Three Rivers Festival. Tickets available here and are free to the public.]

“Where did this mullet originate from, in all of its glory?”

Maybe I’m biased. Maybe it’s because I’ve admittedly gawked at the folk hero figure of American Mullet: Legend of the Silver Fox, best known for serving up looks at his luscious locks. It’s hard to not do a double take. Or maybe it’s due to the simple fact that this proudly local Fort Wayne production is a very well-made, entertaining, and occasionally enlightening time at the movies. The film reminded me a lot of the best kinds of teachers I had growing up; their curriculum might have been standard, but there was a liveliness and an honest effort behind their approach to the material that made the class forget they were being taught a valuable lesson. How appropriate that such a documentary ends up sporting a “business in the front, part in the back” ideology about life itself.

If you’ve frequented the area’s bar scene during the past few decades – from Wrigley Field to Flashbacks to Corner Pocket and more local haunts – there’s a decent chance you might’ve caught a glimpse of the “Mullet Man” in the flesh. His birth name is Patrick Kopacz. Average height, shorts above the knee with a shirt sometimes rising above the belly, a cold Coor’s Light with blue mountains wrapped in a single napkin, donning a gray mane rivaled only by that of the Old Testament’s Samson. Some might even see it from afar as a superhero’s carefully groomed cape. It’s impossible to not be intrigued by the mere sight of the man, as is fully evidenced and proven true by the very existence of this documentary. You’re compelled to be in his company. You want to know his story.

It’s always been hard to keep track of the Mullet Man as he drives from one spot to the next in his silver PT Cruiser (an appropriate car for a self-professed “cruiser.”) Pictures of him will pop up on a Facebook page dedicated to his unconventional celebrity (with nearly 6,000 likes) and posts are shared saying where he’s been spotted. But filmmakers and friends Dan Epple & Mike Colone decided to take things into their own hands, diving and digging deep to potentially unravel the mystery behind a true folk legend. Along the way, American Mullet doesn’t just serve as an expectedly friendly meet and greet with Patrick, but also offers up insight and a minor history lesson with a Fort Wayne focus.

There’s an understood, hardly understated playfulness throughout the sprite American Mullet. It clocks in under 90 minutes, shows a reenacted Mullet Man (Scott Hess) in all his glory, and takes a satirically serious slant to a subject matter deserving of that very niche description. A few moments admittedly lost me, though. Footage of a bygone gentleman known as “Disco Harry” goes to show that all generations admire people who stand out without having to step onto a pedestal, but the scenes still felt like diversions. A brief moment of Patrick as a baby oddly reminded me of Nickelodeon’s old show Weinerville in a weird way. And the countdown to a surprise birthday party for Patrick gets a bit lost in translation during the film’s build-up. These are minor qualms, especially when taking into consideration just how well the rest of the documentary works, both in parts and as one piece.

American Mullet understands the powerful pull of an intriguing myth, where it might take you, and how the “why” of a story sometimes matters less than the “who, where and when.” It’s energizing to watch Epple and Colone – two grown men looking for a gray hair in the city’s haystack – talk about the film’s subject in the same way you hear a child profess their belief in Santa Claus. Even some of the shots from interviews like the one above, carefully lit and evoking a campfire aesthetic, infuse the tale with the kinds of limitless endeavors you’d dream up in a circle of friends. And that’s the refreshing, magical, fountain of youth spell that director Ryne Hastings and his collective crew cast in the film’s earnest approach to unfold a mystery, reminding us that the end matters far less than the journey it takes to get there or the many people you meet along the way.

This documentary – one of the best I’ve seen so far this year – has the private eye sense of Where in the World is Carmen Sandiego?, the catchy storytelling of Are You Afraid of the Dark?, with the answers and the soft hearted center of Mister Rogers’ Neighborhood. The big difference is that American Mullet: Legend of the Silver Fox captures those intimate feelings in the film format, showing that a unique documentary chasing the essence of a unique individual can be just as fun as an old folk tale piece of fiction, and that the best life is an authentic one, full of warm conversation and a cold Coor’s Light. Don’t forget the napkin.

“It’s okay to be yourself and live in the present.”