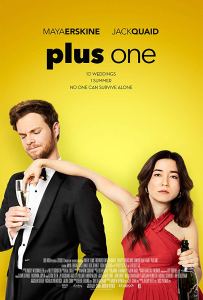 “It’s nice to tell someone that you’re in.”

As a single man who’s coasted on the last legs of his late twenties as long as humanly possible, I can personally attest to the fact that Plus One – a pleasantly irreverent indie picture with proper shrewdness and a few decent learning points – is both relatable and surprisingly insightful. This is a common story, told in an uncommon manner, and it’s one of the more enjoyable and unexpected films to come our way this year. Plus One, both as a movie and as a diary entry of the Instagram variety, embodies the importance of seeing a familiar piece of art or a friendly face in a refreshingly new light, all through a recognizable filter. 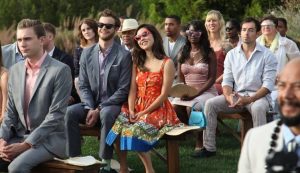 One of the biggest hurdles early on during Plus One is trying to like Ben (Jack Quaid), an affluent and aimless college grad working for the family business, and a somewhat decent guy who’s been conditioned to shy away from long-term relationships. Ben mainly talks with broad, sweeping strokes of excuses, and his bullshit works far less frequently in the bedroom than he might’ve hoped. He’s alone because he refuses to know himself. Enter the enigmatic Alice (Maya Erskine in one of the year’s best comedic performances), Ben’s college bud who’s tackling many of the same overwhelming and daunting schedule of weddings. They’re like two vastly different acquaintances sharing a ride towards the exact same destination. So why not go halfsies and split the cost? 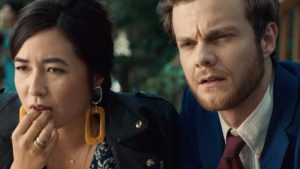 They’ll be each other’s titular plus one during a seemingly endless series of Summer weddings. Ben can usually be found sitting at the table or trying to invite a lonely lady back to his hotel room. Alice is normally so tipsy that she’s topsy-turvy, bouncing all around the dance floor, charming people she’ll never meet again. The two are polar opposites, and for that reason they attract over time. It may be true that distance really does make the heart grow fonder, but Plus One shows how trial and error can lead to a similar result. Maybe love is more about accepting the imperfection of a relationship than it is trying to nitpick your way to perfection.

There’s a lot to like about Plus One. Writers/directors Jeff Chan and Andrew Rhymer don’t force or mine for laughs; they carefully plant them and trust the cast to cause an explosive press and release at just the right moment. This is a new kind of romantic comedy, inspired by films like Four Weddings and a Funeral but told with the audacity of something akin to (500) Days of Summer. And as if that wasn’t enough, the whole project can thank the diverse talents of Maya Erskine. She’s acerbic, witty, charmingly grounded and entirely authentic. Erskine knows how to garner a deserved laugh through depravity and pure earnest, and Plus One is able to add up and show its work because she brings so much to the table as the most important part of the equation. It’s easy to like this movie and it’s hard to not fall in love with Eskine’s rough and refined portrayal of Alice. Plus One will go down as one of the best Rom-Coms of the year, which makes it even more baffling that Netflix didn’t snatch this movie up immediately.

“If you spend your whole life looking for perfect, you wind up with nothing.”