“All it took was a single day.”

Unrealistically romantic in an intentional way and fatalistic to a sharp fault, The Sun Is Also a Star gladly exists in the lofty landscape of poetry, where the brightest stars conveniently align and where serendipitous fate defines paths instead of simple logic or reason. It’s a horoscope of a movie, a wise fortune cookie phrase inspiring love and the pursuit of happiness but missing a personal touch. The performances are solid, the direction controlled, and the cinematography brilliantly lit. The story, however, lacks the emotion that such high stakes deserve. The Sun Is Also a Star might look beautiful, but the romance is rather bland. 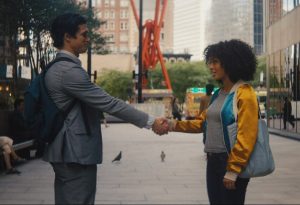 A lot can happen in a day, especially in the streets of New York. Natasha Kingsley (Yara Shahidi) should be worrying about preparing for her senior year of high school, but instead has to pursue last ditch efforts to keep her entire family from being deported back to Jamaica the next day. Daniel Jae Ho Bae (Charles Melton) has an interview to help him get admitted to Dartmouth in the Fall, because as the first born to Korean immigrants, he’s expected to become a doctor. A far cry from becoming a poet like he dreams of being. Natasha thinks with her head first, Daniel with his heart, and the two cannot seem to escape each other once these opposites cross paths. Nor do they really want to.

Most of the film finds them walking and talking. Natasha only obliges after Daniel saves her from being hit by a reckless driver, and although she refuses to believe that he can convince her to fall in love with him in mere hours, her eyes linger long enough to tell us she’s not one hundred percent certain either. For being a huge chunk of the story, so much of their time together doesn’t leave a lasting imprint. They talk about heavy and heady topics: fate, love, the cosmos and how all three are inextricably tangled together in the intricate web of life. But the dialogue in their conversations is rarely memorable or grounded by the family drama playing out in the backgrounds of their own lives.

The romance leans a little too heavily on the saccharine and the many montages hit us over the head with the profundity of existence. However, thanks to the capable direction from Ry Russo-Young (whose Before I Fall was one of 2017’s great surprises), the movie captures the inexplicable nature of love at first sight, so gorgeously lensed by the film’s cinematographer Autumn Durald and scored with wispy hopefulness by composer Herdís Stefánsdóttir. The Sun Is Also a Star is a little rough around the edges, and the lengthy title a literal drag, but it’s always nice to see a mature, thoughtful film led by two talented performers who all too rarely get to be the face of falling in love.

“You never know why you were meant to be here at this time.”