“Age is truly just a number.”

Headlined by a murderer’s row of legendary SNL ladies who worked both in front of and behind the camera on NBC, it’s easy to assume that Wine Country and its who’s who cast of comedic vets will spray the screen with quality jokes shot from a Tommy Gun. The only problem is that the aimless film shoots so blindly, hitting its massive target every so often out of pure coincidence. Wine Country is too long, too predictable, too tainted by cheap Trader Joe’s tannins, and is as head-splitting as a few too many glasses of a bad merlot. To call this one disappointing and discombobulating is an understatement.

The true story’s inspired by multiple events where these real life friends went away to celebrate. 6 women, 3 days, enough wine to fill a barrel. What could possibly go wrong? Surprisingly, one of the weakest aspects of the film is the character development. They have all gathered together in Napa Valley for Rebecca’s (Rachel Dratch) 50th birthday. She’s a therapist in a loveless marriage who needs to take her own advice. Naomi (Maya Rudolph) fearfully dodges voicemails from her doctor. The workaholic Catherine (Ana Gasteyer) has a hard time unplugging from the grid, still trying to take business calls and dictate emails rather than typing. Jenny (Emily Spivey) often flakes on plans and surprises herself by showing up for once. Val (Paula Pell) spends money because she has it, and she’s the most candid of the bunch. Last but not least is Abby (Amy Poehler). She’s gone through a failed marriage, recently lost her job, and has been obsessively writing the itinerary for this getaway as a means of preoccupying her mid-life crisis heart.

Wine Country wants to be taken seriously even though it’s really just an assemblage of class clowns making inside jokes, which downplays the dramatic beats as contrived scenes that are simply par for the course. We know they’re going to reminisce, have a big fight and break off into factions, then make up like nothing really ever happened in the first place. It’s tried and true with nothing new. And the real shame is that the script feels forced into a corner full of recognizable tropes and clichés, limiting these women to one note personalities and then drunkenly pitting them against one another. The alchemy of the tangible chemistry these actresses have is lost to stupid plot points and a story that has a theme but no way of earning or stumbling its way there. 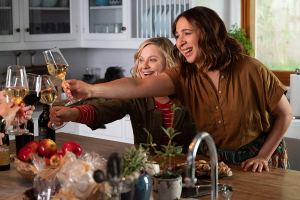 Wine Country mismanages itself into being a film that’s both too much and not enough at the same time, giving us an unlimited refill option on the vast dramatic menu and a stingy pour from the smaller comedic fair. And while the great Paula Pell does her best to steal every scene she’s in, Amy Poehler’s directorial debut is too big and broad. I can picture a more intimate and moving – and therefore funnier – film with three characters acting off of an outline with room to experiment (something like The Trip trilogy comes to mind) rather than Liz Cackowski and Emily Spivey’s overdone script. So instead of laughing my way through the scenic hills of Wine Country alongside hilarious women, I mostly found myself cringing at this only slightly funnier, female-centric version of the dreadful Grown Ups. Like so many SNL sketches, this failed reunion has a paper thin premise stretched out to maximum length, a few good jokes, and a thoughtless ending. Save yourself the headache.

“Why is this so difficult?”