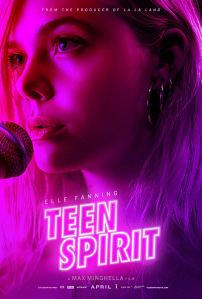 “Luck has nothing to do with it.”

You don’t really know what to expect going in with a film titled Teen Spirit. You might predict a grunge riff on Nirvana’s most famous song, or maybe the echoing “Rah! Rah! Rah!” of a High School cheer squad on the sidelines of a Friday night lights game. Turns out we get both and then some. This movies broods with the best of them, and it unleashes its emotions through the technicolor chords and flailing dance moves so associated with progressive pop music. Teen Spirit looks stunning, sounds great, and features a few breathtaking performances. Remember the repeat sign you could press on your old iPod? The two infinity arrows turning into each other? This picture is the kind of catchy and emotional song, movie, and experience deserving of being played on a loop, with all three rolled up into one. This one is my jam. 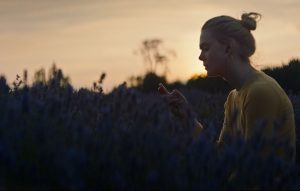 The Polish speaking Violet Valenski (Elle Fanning) looks to be sitting in a lavender field, surrounded by the purple herb’s symbolism for ambition whilst dressed in yellow’s enthusiasm for a brand new day, scrolling through her mini iPod for a song to be the soundtrack for this mini moment in her life. Music helps her interpret, express, and cope with the way she’s feeling. Violet lives with her Mom Marla (Agnieszka Grochowska) off the south coast of England on the Isle of Wight. Dad’s long been out of the picture. She’s 17 and on the cusp of finishing school, waitresses part-time, helps out around the family farm. Is bullied and a bit broken. Not much energy or time is left to pursue her passion for singing, and Mom suggests she devotes those efforts to choir in praise of their Lord. And so, quite expectedly, Violet rebels. There’s a hunger and a want for more lingering behind those quiet eyes and that initially shaky vibrato.

A sneaky performance at a little pub introduces her to Vlad (Zlatko Buric), a has been opera singer who’s now a fairy godfather barfly. He promises to shore up Violet’s technical skills in exchange for possible monetary gain as he drives her home in a far less magical ride than Cinderella’s pumpkin-to-crystal carriage. She’ll take all the help she can get. The big singing competition “Teen Spirit” finally visits her little town and calls to her, through billboards and TV commercials playing at work, as she otherwise loafs around town. Violet isn’t a confident young woman. She’s timid, tepid towards others, but incredibly vocally gifted when her eyes close for those brief seconds and the background music begins to play, laying the tracks for her steamrolling train of talent. Maybe her dreams can be realized when she’s awake after all. 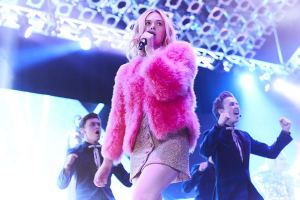 The day I saw this film, I watched an interview with Seth Rogen on YouTube that helped me to understand how I could love such a flawed narrative, which you should know Teen Spirit definitely has. It comes down to story versus plot. Plot is what happens in the film and story is what the overarching film is about. Plot serves story, not vice versa. Teen Spirit has silly plot points that are clumsy but it still visually builds the same story with similar artistry. We know a familiar plot has been dug and filled with different stories before, yet somehow Teen Spirit differentiates itself enough to justify taking up another space on the graveyard’s grounds. The brilliant cinematography by Autumn Durald (who I’ll guarantee will one day be an Oscar nominee) simply makes the picture look better and more crisp. Cam McLauchlin’s careful editing elevates what could have been a glorified music video into a film with an earnest cinematic vision (doing wonders conveying Violet’s emotions during her first audition). Then there’s first time writer/director Max Minghella, an actor you’d recognize but might not know by name, and a reported pop music aficionado, who’s made something special here. He labored over a movie with a young female lead, about music and life, and how true artistry can thrive when integrity meets an uncompromising vulnerability to be yourself. I’ll watch anything he makes after this smashing debut. 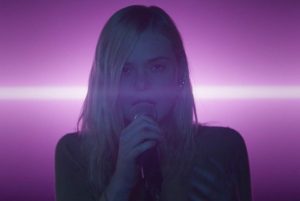 With its unique spin on the globalized hit American Idol, the smaller scaled and more intimate Teen Spirit adds behind the scenes context for talent competitions, as well as enough anxiety to have made my resting heart rate on my Fitbit leap up by nearly 20 ticks during the big make or break moment. It’s all a vehicle for Elle Fanning, who I was very critical of early on in her career, and who’s since become one of the most hypnotic actresses of her generation. She just has the “it” factor, sharing with us a voice you might hear on the radio, dancing unpredictably the way Lorde does when she performs, and imbuing through those vacant and wandering eyes an inexorable, irrepressible want for more. It’s a great performance in a film about an outsider who’s unafraid to pick up the phone when her vocation is calling her center stage. She’s got this. We’re all meant to do something. To be a singer, a writer, a cook, a parent, a contractor, an accountant. Teen Spirit suggests that the options are endless. So don’t stop going to auditions. Don’t take no for an answer. Your niche and your first big gig is just around the corner if you’re willing to work for and to perfect a natural gift.

“Sing from your heart.”