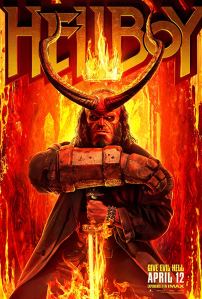 There’s so little to like about the rougher, rowdier, and altogether disappointing Hellboy that it’s hard to even stomach how the few parts that function well – mostly the two prominent performances and an adrenalized action sequence – can even belong to such a rundown beater of an anti-hero vehicle. The script is in absolute disarray, littered with exposition and attitude but close to no soul or heart, and the whole thing just feels like it’s been forced together in the wrong order. This new take and reintroduction to Hellboy would have fared far better had it scrapped most of the trite and tired world building and simply started where this picture chooses to vigorously end. Something tells me that we won’t be seeing this property rise from Hell anytime soon.

There’s an evil Blood Queen named Vivian Nimue (Milla Jovovich) who’s dismembered and cast away during the Dark Ages by King Arthur. Then in the present we come across Hellboy (David Harbour), a half man and half demon with a strong right hand and horns cut down to the stump. Think of him as an angsty teenage version of Clifford the Big Red Dog with opposable thumbs, a filthy vocabulary, and a body covered in as many scars as his troubled, confused inner psyche. Trevor (Ian McShane), Hellboy’s adoptive Dad, turns his deadly son into a killing juggernaut, vanquishing all evils away from the human world. I honestly don’t recall much more in regards to their troubled relationship.

Hellboy’s latest task is to destroy a revived Nimue who’s hell-bent on plaguing London – and eventually inciting the Apocalypse – which she previously failed at centuries ago. He partners with the clairvoyant Alice (Sasha Lane) after she saves him from giants, and he’s known her since birth. There’s also Ben Daimio (Daniel Dae Kim), an ex-military man with a special gift for a particular kind of transformation. In this case it takes three to tango with the powerful Nimue, to step on her toes and to ruin her potential to the spotlight atop the podium. Hellboy is bad movie that’s about as interesting as I’ve written it to be thus far, which hopefully reflects the tedium the picture induces. Overstuffed with dumb history, overcrowded with characters who never matter one bit, and overtly violent in an unexceptional way, Hellboy squanders the plum role for Harbour and the solid performance from Lane by placing them in a world written without rhyme or reason. 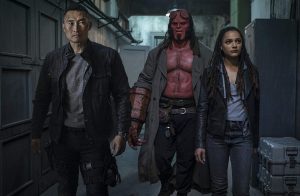 It’s pretty hard to write about a movie which packs so much inexplicable story into one incoherent space while somehow still managing to gloss over most of those same vaguely vacant plot points. We meet Merlin, the Baba Yaga, visions of spirits and even a giant talking hog who morphs into an unstoppable beast. Why? To fill time, I guess, because these scenes rarely entertain. It’s a shame, too. I actually kind of liked Harbour’s uneasy, adolescent approach to the role, like a more menacing and less snarky version of Deadpool (it seems clear writer Andrew Cosby and director Neil Marshall tried to replicate that rare magic act to less than stellar results). And Sasha Lane proves that she can be as convincing as an action star as she is in an independent drama. It really wouldn’t have mattered if Hellboy had tried to run on propane or charcoals or wood though. The film lacks a creative spark, and it’s missing an inner fire to the point of being rightfully labeled as a genuine misfire. If it was playing a classic old game of “Hot or Cold,” Hellboy would be fumbling around about as far away from the object as possible.

“This kind of thing isn’t pretty.”