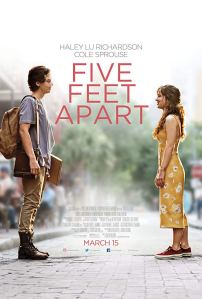 Some people will like Five Feet Apart. I mostly didn’t, just to be upfront about it. The film’s informative, delivers a few decent laughs and a handful of genuinely moving scenes, and it’s sure to tug on the heartstrings of adolescents who’ve fallen in love with the idea of falling in love no matter the cost. I imagine most who fit that billing will happily indulge in, and perhaps gorge themselves on, the story’s five-course meal that’s drowning in a decadent, saccharine sauce. But that doesn’t mean it’s all delectable or edible either. Five Feet Apart starts out as an inoffensive, cloying and cute film that becomes sad for sadness’ sake, and mind-boggling stupid in its waning moments.

For what it’s worth, the film does have an effective open. Through a montage of hugs and kisses and hands held tight, we hear a soft-voiced Stella (Haley Lu Richardson) stress the importance of human touch, suggesting we need physical contact “almost as much as we need to breathe.” Science might suggest otherwise, even if most souls will be in agreement with her findings. In depicting a high-schooler with Cystic Fibrosis, the film’s earliest segments are truthful as they follow a young woman whose second home is the neutral colored walls of hospital hallways. Stella also has a Vlog, which is a great story device as we watch clips of her YouTube recordings, informing her online audience and those in the theater crowd unfamiliar with CS as to what the terminal illness really entails. I imagine most of the information will be new to many young moviegoers. It’s surprisingly educational.

Stella’s fellow CF survivor / best friend Poe (Moises Arias) provides almost all of the comic relief, and might be the best part of the entire thing. Meanwhile her focus on controlled structure shifts when Will (Cole Sprouse) enters the wing, a rich kid who’s unwillingly participating in a new drug trial to end his rare bacterial strain, flirting with Stella by reminding her that they’re both ticking time-bombs. Many of the forthcoming scenes they share display grand romantic gestures, dumb fights, and implausible actions as mere feet separate them for health concerns. There’s decent banter between them – Richardson is a rare talent and saves the film from oblivion while Sprouse smolders away doing a poor man’s Jame Dean – although the two are never grounded in a believable romance. To spark their fire requires a liter of lighter fluid and an entire book of matches, briefly burning brightly but providing little to no heat, unable to bridge their forced distance through conversation or chemistry. It seems that loving without touching is as difficult in real life as it is nearly impossible to convey on the screen.

Stella and Will spend their courtship dodging the overbearingly well-intentioned Nurse Barb (Kimberly Hebert Gregory), video chatting, using a pool cue as a literal reminder as to how far apart they must remain, talking in ways written by experienced grownups yet spoken through the mouths of naive young adults. None of their parents factor into the story, for whatever unthinkable reason. And even then, the movie maintains a likable lightness to its subject matter until the avalanche of a final act. The big climaxes seem to be the (no pun intended) kiss of death in these types of soapy, mortality plays riddled with YA genre clichés. Great films such as Me and Earl and the Dying Girl and The Fault in Our Stars manage to authentically say something universal about life and death, whereas manipulative movies in the realm of The Space Between Us and Everything, Everything exploit illness as a means of infecting its target audience with a vapid and viral message. Five Feet Apart is better than that latter grouping, mostly because Haley Lu Richardson’s sincere vulnerability shines through, but it still resides too close to them for comfort. Like a chaperon at a grade school dance, I suggest that you maintain your distance.

“You’re as delicate as a jackhammer.”