Is love ever really enough? Love for country, for the arts, for another soul? Can love alone salvage and save something or someone we’re inexplicably yet incurably drawn to? Should it be believed to contain such omnipotent power in the first place? Cold War doesn’t have the answer to these many interlinked questions, nor does the film pretend to harbor such sage wisdom either. Instead, this fleeting romance – somehow spanning 15 years and multiple European locales in a mere 90 minutes – prefers to mirror itself through beautiful tragedy. It’s an efficient movie, a tightly wound yet rarely rushed story, and one of the most distinct, intrinsically human pictures of the year. 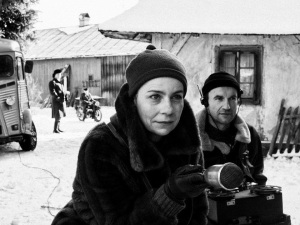 The film starts in a puzzling place. Not because what’s unfolding on-screen is out of this world, but more so because it’s beholden to one from the past, resurrecting history and ghosts in a peculiar, increasingly intriguing manner. Musical director Wiktor (Tomasz Kot) travels through countryside villages with his work partner Irena (Ageta Kulesza) and is driven around by Kaczmarek (Borys Szyc), an eventual cog in Stalin’s carefully conducted Communist propaganda instrumentation. They record bagpipes, violins, solo songbirds, all to capture the folksy social zeitgeist of the commoner and their lower-class, proletariat sense of identification. Cold War immediately descends into 1949 Poland like an eagle feasting upon its prey; the film knows what it wants but takes its time before giving audience members the all important why of the matter. That’s bold, strategic, confident filmmaking that adheres to formula whilst simultaneously bending convention backwards. Safe to say the method works.

Wiktor and Irena hold auditions for a traveling musical troupe. Individuals must look the part, have proper pitch, be decently proficient in dance. Then in walks this girl. Zula’s (Joanna Kulig) a striking, mesmeric, fair-skinned Helen of Troy with an imperfect voice that perfectly sells the flawed stories of the human experience. These physical details – so often used in film criticism by men who prescribe such descriptive adjectives to actresses but never their male cohorts – actually matter to this story, chiefly because the physical and the soulful attraction between these star-crossed lovers bind them with interlocked yet easily interchangeable hands. They kiss, they fight, they surrender themselves – of body and spirit – over to one another completely, and still their love story is likened to a race car navigating a picturesque road littered with pot holes. The stunning view comes at a flattening, grave cost. And yet they endure through two masterful, painful lead performances. 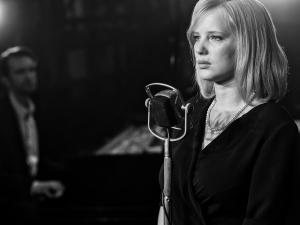 One of the most pivotal moments in Cold War is rudimentary, monumental, and teeters on the slippery distinction of pure brilliance. I think most will miss the importance of such a basic scene; it took me 3 viewings to finally catch the nuance. Heading to a party, Wiktor asks Zula if he needs to wear a tie. She suggests that he should. Cut to them entering the gathering, his neck unbuttoned and unbound, her arm loosely wrapped around his before sauntering off for cocktails and gossip and confrontation. Cold War shows two fated lovers divided by an inconsolable world, so clearly intertwined by easy slipknots, like mitigating meteorites clashing before they strike the surface. This profound, simple picture has dark tones and sadness and desperation, all of which happen to be doused in posthumous hope. Cold War looks for faith in moments of crisis, albeit in the spaces where it thinks shared salvation can be most easily found. When this grey world ends, you almost believe that this ill-fated couple has finally found the path to the other side, where the grass is greener and where – as the picture’s tagline suggests – love has no borders. It’s a spiritual film without ever being an overtly religious one; the story is the broom and we in the crowd are the smut, so prepare to be swept up by a rapturous fervor, experiencing the dour final image as something grim and intensely sanguine all at once.

Like a bleaker, more desperate version of La La Land by way of Ingmar Bergman and Ernst Lubistch, Pawel Pawlikoski’s Cold War uses print and picture to create truly remarkable B&W portraits, reteaming with cinematographer Lukasz Zal to evoke something so dated yet remarkably timeless. They tend to place the people in the lower quadrant of the boxed-in frame – just as they did on 2013’s Best Foreign Language Film winner Ida – with the effect helping to further entrench us into the world in which this tiny little story exists. Yet here the camera gets to move around more, to organically flow and dance with the sad songs which serve as the beat and the rhythm of this tragic cocktail that’s properly topped off with a twist of a lemon’s bitter pith. Cold War might be the shortest epic I’ve ever seen, and not only is it my favorite foreign film of the year, but it’s also one of 2018’s very best.

“Let’s go to the other side. The view will be better there.”