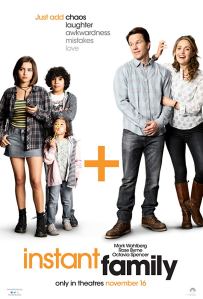 “It’s important to have a sense of humor about this kind of thing.”

Maybe it’s because the world around us seems to be drowning in cynicism. Maybe I’m just a softie who’s easily moved to tears. Perhaps both are true. Either way, the fact of the matter remains that Instant Family is one of the best feel-good movies of 2018, and that’s because the story never shies away from the ugliness or sorrow of average family matters, let alone the makeshift unit at this movie’s center. Things go awry – surprisingly far more often than they ever glide by through smooth sailing – and the film earns its emotional final act by putting in the time and the effort to ensure us that all parties involved actually care. Instant Family is evidence enough that popular cinema can be just as powerful as the dramatic heavyweights when it’s willing to fight for what it believes in. 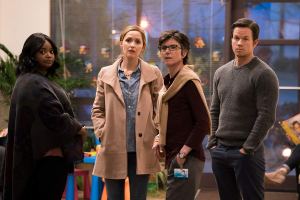 Pete (Mark Wahlberg) and Ellie (Rose Byrne) are pretty much the foul-mouthed version of HGTV’s famous Fixer Upper couple Chip and Joanna Gaines. Pete handles the demo and the construction, often hearing big ideas and wagging his tail like a happy pup. Ellie works on the design side, walking into rundown homes while pointing out the changes to come, ensuring folks by telling them to, “have a little vision.” He’s the hands and she’s the brains of their successful house-flipping business. They’re in a rut though, fixing big estates by day, returning to their tidy and quiet and simple home by night. Ellie suggests fostering, Pete eventually agrees, and before you know it they’re on a full-blown course towards adoption. Instant Family might be a little weak when it comes to their driving motivational force, but none of that matters when they meet the kids. It’s love at first sight and love before first fight. 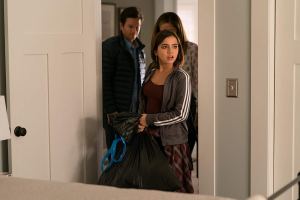 As with all new relationships, Pete and Ellie experience a brief honeymoon stage before things inevitably turn for the worse. The eldest Lizzy (Isabela Moner, an up-and-comer who’ll be a household name sooner than later) plays part-time parent as a 15-year-old. Juan’s (Gustavo Quiroz) the middle child, so clumsy and constantly petrified. Lita (Julianna Gamiz) is the baby of the family, full of attitude and a howling shriek. What I loved about Instant Family is that we get to watch people who’d normally throw in the towel at the slightest uncomfortable trigger evolve into individuals who are willing to do anything and everything for the people they love. It’s a sloppy, dirty movie at times, and that’s an appropriate reflection of life itself. Ever since my childhood days in the family playroom, I’ve noticed that sometimes you have to make a proper mess before you can really clean things up. Instant Family operates on this simple, truthful observation. 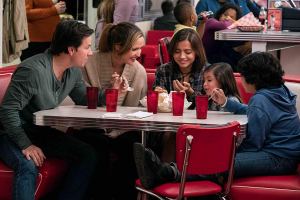 Sean Anders’ 2017 movie, Daddy’s Home 2, was far and away the worst experience I had at the theater last year. It’s an abomination of a film, utterly devoid of heart and soul, mistaking horrific amounts of meanness for comedy. Instant Family has it’s fair share of despicable cruelty as well, except this time Anders has finally written/directed something that’s humanized and grounded by his own experience. Based on his own family, the movie reflects Anders’ journey through adoption. And unlike a photo album, the film isn’t packed with pleasantries, nor is it full of smiles and grins. Instant Family shows that hardships born from change and growth are worth enduring, and that love – whether innate or learned – is always something worth chasing after.

“Things that matter are hard.”