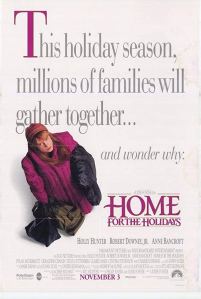 “Are you losing your mind yet?”

Traditions are supposed to have deep, significant meaning, passing beliefs from one generation onto the next. They’re an immortal lifeline simultaneously linking the present to the future and to the past. Too many Americans confuse tradition for habits though, and that distinction is all too clear from mid November to New Year’s Day. Home for the Holidays emphasizes how families often come together against their own free will, repeating and replaying the same scenario again and again, and its forgettable drama is bolstered by a scrutinizing eye for differences and details.

Bad news piles onto Claudia (Holly Hunter) like an enveloping avalanche. She’s been fired due to budget cuts. Claudia’s daughter (Claire Danes) stays in Chicago to give her virginity to her boyfriend. She gets stuck sitting next to an eavesdropping Chatty Cathy type on the plane, loses her Winter jacket, and endures standstill traffic with mom Adele (Anne Bancroft) and dad Henry (Charles Durning). Of all the scenes in Home for the Holidays, this one might be the most simple and perfectly composed. Claudia’s not even back to her childhood home and already she feels stuck, bombarded by questions and harsh judgement. “I can see you roots,” her Mom whispers, adding in one last insult before they reach their final destination. A lot of moments in Home for the Holidays just don’t work because they’re either too phony or extreme, but it absolutely nails this brand of minuscule interactions. We’ve all been there, taking these quick and personal jabs to the chin or delivering them off the cuff.

Things get better before they eventually subside and worsen. The lost sheep and semi-openly gay Tommy (Robert Downey Jr.) returns to comfort his sister. With him is the handsome Leo Fish (Dylan McDermott), a nice guy who turns out to strictly be Tommy’s pal, and maybe a love interest for Claudia. This part of the film brings an energy that’s sorely missing elsewhere. Come Thanksgiving Day the eldest and most uptight of the litter Joanne (Cynthia Stevenson) arrives with her cowarldy husband Walter (Steve Guttenberg) and their two uniformly snotty kids. Combined with an awkward, out-of-place drunken reveal by the mentally ill Aunt Glady (Geraldine Chaplin), the movie gradually adds side dish after side dish until the table is piling over like a less devout, more wholesale Last Supper. It’s better described as a mild massacre than it is a meal.

Jodie Foster’s film takes the long-winded scenic route, telling the tale in 8 separate chapters with each segment becoming less important to the overall trajectory. They’re interesting and uneven and often shortchanged. That’s the back and forth style, grueling game tug of war that occurs during Home for the Holidays, a movie that understands most family gatherings have a push and a pull effect that varies from person to person. We all have baggage and more often than not it’s of the carry-on variety. And while I think 2005’s The Family Stone perfected this similar pitch with more emotion and deeper character development, Foster’s film earns its frustrations through the manual nature of the times. We’ve lost the ability to slam the dial phone, to angrily crank a car window, to develop an embarrassing Polaroid as quickly as possible. Home for the Holidays takes its sweet time, almost to the point that it begins to stew, but maybe that’s why the whole thing sticks to your bones and why we come back for more year after year.