“You’re not familiar to me.”

If comedy truly boils down to tragedy plus time, then there have been very few films of late that so stridently prove the equation to be as uncertainly correct as the approach taken by All About Nina. It has funny bits, a few genuine blips of laughter, but this movie is about pain and the struggle to separate it from one’s own identity, and the story builds to a place that’s completely raw and open. All About Nina starts out with all the appeal of a scab, but then it scratches and reopens the wound, leaving us with the hope that a scar will form in good time. Beauty can be found in the healing process.

Nina’s (Mary Elizabeth Winstead) acerbic, controversial comedic sensibilities are not for the faint of heart. She doesn’t bore us by talking about plain old sex; Nina’s main topic of conversation is fucking. How she prefers random hookups over relationships, going into great detail about her carnal escapades. The routine isn’t very funny or even full of jokes, but is more or less meant to be frank, allowing a woman to speak in the rough and rowdy cadence of so many comics who preceded her. All About Nina begins in a very confusing fashion because we can’t pinpoint where these motives are coming from, although they’re always gross enough to be engrossing.

An abusive fling with a married man takes Nina from New York to Los Angeles, finally deciding to audition for Comedy Prime (I’m not sure what to compare the fictional entity to, mostly because the film is so vague in this regard). The Eastern transplant lives with her agent’s friend named Carrie (Angelique Cabral), a published author who subscribes to meditation. Nina also meets Rafe (Common) soon after setting foot out West. He’s a successful contractor, an older man who confuses Nina by being completely open and honest. I never really bought into their love affair because it just feels so inorganic, and yet I couldn’t keep my eyes off of them. These two performers are so devoted to their characters that you’re almost able to forgive and forget their total lack of chemistry. 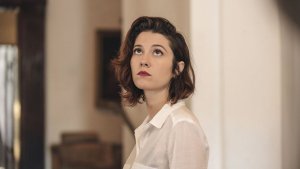 While All About Nina gives its protagonist a comedy stage to inhabit (which Winstead owns like a veteran performer in one of her best roles to date), I don’t really think it’s for comedic purposes. Nina carries a long, dark past with her, shielded by her blacked out wardrobe and leather jackets, numbed by the constant drinking and screwing. In her debut, writer/director Eva Vives has made a film that’s fairly inconsistent and a bit too meandering, but she also shines a spotlight on the struggles of women who transform their own misery into an entertainment vehicle that audiences can join them on. All About Nina, despite its structural problems and some serious compatibility issues, brings its message home when Nina gets to command the stage and to communicate her truth, stripping away all of the dishonesty and the bullshit to finally to just speak from the heart. Eva Vives shows great promise as a storyteller, and even more so as a champion of survivors who refuse to remain voiceless.