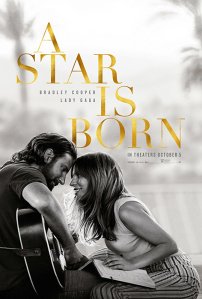 “It has a magical quality to it.”

Romantic in that special way a potential lover can absolutely level you with their eyes. Comedic in the sense that all great tragedies have a little something to laugh along with. Musically driven so that we, the audience, can look inside the inner-trappings of the singer’s mind. And every bit as dramatic as a film full of conflicted, troubled people living real, authentic lives should be, A Star Is Born truly has it all. I’m not sure I’ll see a more moving, raw, electric film the rest of 2018. It’s quite brilliant when it comes to the trials and tribulations of addiction, the people it affects, how the debilitating disease is able to commandeer every choice and action along the way, and I think it might just be a masterpiece.

They meet at a drag bar, so deep into a Friday evening that it’s technically Saturday morning. Rock superstar Jackson Maine (Bradley Cooper), having just finished a gig – and in the car ride finished his bottle of booze – needs a little more liquor in his system. He sits at the bar, shoots the shit, slams drinks like they’re shots. It’s apparent that he’s pulled this routine before. Then on stage walks Ally (Lady Gaga), a singer so talented that the rest of the drag girls don’t mind letting her perform. She belts out Édith Piaf’s “La Vie En Rose,” strutting across the bar-top, hitting the high notes and catching Jack’s glassy-eyed gaze. In this moment time literally and briefly slows down, and their connection is instant. Late nights such as this one often take you like a strong ocean current, swimming in the excess of drinks and laughter and conversation, drifting out of sight from where you once entered the water. Much later in the film, Jackson’s lifelong friend Noodles (Dave Chappelle) tells him, “you float out, float out at sea, and then one day you find a port, say, ‘I’m going to stay here a few days.’ A few days becomes a few years. And then you forgot where you were going in the first place. And then you realize you don’t really give a shit about where you was going because you like where you’re at.” Maybe that’s the point of A Star Is Born; the importance of finding an anchor in the tsunami of existence.

The magical opening act of the film is one for the history books. Jack invites Ally on-stage during a show, she unleashes her gift onto the crowd and an overnight, viral celebrity is born. They fall for each other, hard and fast, and we believe every second of it. We even see them make love a few times on-screen, but their relationship is never more passionate or revealing than when it ditches the bedroom for the stage. Foreheads pressed together, duets sung with ferocity and subtlety, their eyes always entranced by the voice and presence opposite themselves. A Star Is Born soars past the stratosphere and into the cosmos, swirling around the way a liquored up man stumbles about, luxuriating in intense, honest intimacy. You can’t start on such a dramatic high without eventually falling back down to Earth – it is not sustainable – and it’s much to the film’s credit that by the time the comedown arrives we’re completely invested in their partnership and their well-being. It’s been a long time since I saw a film and so deeply cared about its leading characters.

What’s most interesting about Cooper’s ambitious writer/director/actor take on A Star Is Born is that he makes sure to add in a few dashes of necessary human elements. Ally’s father (Andrew Dice Clay) prides himself on the talent of his girl. Jackson’s brother Bobby (Sam Elliott), his longtime manager and the man who practically raised him, admires the talent without understanding the self-destruction, trying to convince Jack to take his tinnitus seriously. It’s a classic, nostalgic tale that’s already been told in three previous films (make it four if you count 1932’s What Price Hollywood?), with only William A. Wellman’s 1937 original taking the time to barely layer in family and its inherent drama. Still though, the film sprinkles in homages to the others. The title card, colored red and sharply written, beckons back to the Cinemascope era of the 1954 iteration starring Judy Garland. And with the help of Lukas Nelson’s work on this film’s remarkable music (“The Shallow” is your guaranteed Oscar winner for Best Original Song), it still hearkens back to the 1976 feature’s mix of the ragged sounding Kris Kristofferson and the voluminous pipes of Barbra Streisand. Not only is Cooper’s directorial debut better and stronger and more visionary than all of the previous films combined, it’s less guarded and more personal, allowing these people to be individuals full of flaws, insecurities, and overwhelmed by the power of love and forgiveness.

It should go without saying that A Star Is Born will be, I predict, the most nominated film of the year. Jay Cassidy’s artful editing cuts the story with just the right chords. Cinematographer Matthew Libatique (Darren Aronofsky’s frequent collaborator) breathes life into a film that would have fallen flat with a lesser visual palette. It’ll likely get three much deserved acting noms, and I wouldn’t be surprised if Cooper earns two more for his insightful writing and inspired direction. It’s a big, bold, beautiful film full of the conventions and the clichés that so often serve as detriments to pictures such as this, and yet the movie has the artistic eye to see things from a different perspective. To challenge us, to embrace us, and to give us a space where we can sing and swoon and laugh and choke back tears. Some films struggle to do just one of those right. A Star Is Born captures every moment and every tone with absolute grace. What a joy it is to watch Ally ascend to stardom, tapping into Jackson’s kegger of a sound, moving into the landscape of over-produced pop anthems, and ending up in a place where she’s able to be her own artist despite Jack’s sobering sadness. A star burns out as another is born. That’s life, on both a cosmic and human scale.

Whereas previous versions were fueled by defeatism and jealously and unclear self-pity, Cooper’s A Star Is Born allows us to meet Jackson Maine while he’s still relevant, and it gives us a reason for his self-loathing. He sells out shows, but he’s also an alcoholic who guzzles down the bitterness of gin, popping and snorting pain pills for good measure (I’ve always wondered if artists give us so much of themselves that self-medicating is the easiest way to fill the void left behind). And as Jack speeds up his death knell, Ally spreads her wings into a fast ascent. They balance each other out. The night they first meet, Jackson looks at Ally like an old, lost, dirty Golden Retriever, his big blue eyes searching for someone in the crowd to rescue him from himself. It’s appropriate that they find each other, build a home, that we only ever see Jack eat with Ally by his side. They’re co-dependent partners in this journey, and because of the tangible chemistry that Cooper and Gaga exude, perhaps even soul mates. A Star Is Born is fueled by the fire of 1,000 suns, showing us that as one force flies another must flounder, and it’s quite possibly a perfect movie. Having anticipated it for more than a year, I couldn’t have had higher expectations going in, nor could I have left the theater floating on a higher cloud. This is the rare kind of picture where you’re able to get lost and feel found all at once.

“Music is essentially any note between twelve octaves. Twelve notes and the octave repeats. It’s the same story told over and over. All that the artist can offer the world is how they see those twelve notes.”