“I don’t care what other people think about me.”

Flower doesn’t stay true to its wicked nature, and I imagine that’s because the film forgets to take the time to deeply scrutinize or examine its reflection in the mirror. As we follow along with the story of a troubled young woman, the movie wants to be a reclamation of innocence lost (or perhaps intentionally given away), and instead it becomes a perverse, twisted, cyclical journey that repeats the worst habits and inclinations of its lead character. Flower doesn’t bloom because it’s been planted in a pot by an absent-minded script that forgets to tend to or water the roots and the petals on occasion. 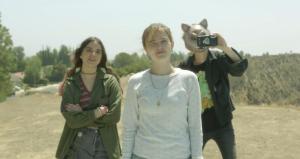 Like a blind-date that goes completely awry, Flower never shields itself from judgement, and in fact I think quite encourages harsh critique. It’s politically incorrect, exudes the worst tendencies of manic teenage behavior, and it all hawks around a lead character who is incredibly difficult to like, understand, or even sympathize with. That’s Erica (Zoey Deutch), a high-schooler who lures greasy and gross men into entrapment schemes. She offers fellatio much to the man’s delight, her friends come in as back-up videographers, the blackmailing enriches the teens. Around school she’s known as a slut. At home, Erica’s relationship with her Mom (Kathryn Hahn) is more friendly than parental. The girl has no guidance or motivation in her life besides that of posting the bail money for her incarcerated Father. Flower is misguided and erratic, but at least Erica’s actions have a glimmer of motivation, and that Deutch (watch her eyes as she listens…you can’t teach how convincing she looks) is a talented enough actress to make them a little bit believable. 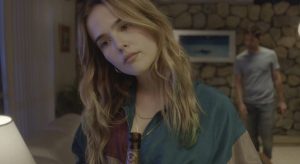 I buy the overall plot of Flower despite how it’s sold and shipped. Erica’s soon to be step-brother Luke (Joey Morgan) gets released from rehab. He was a pill popper, particularly inclined towards Oxy. He’s a sweaty, anxious mess, riddled by panic attacks. Erica takes him to the local bowling alley and Luke runs off in horror as Will Jordan (Adam Scott), known to Erica’s circle as “hot old guy” enters the room. Luke claims to have been sexually abused by a teacher some years back, and Erica plays detective well enough to know that Will is the older man in question. Luke is scared, likely afraid of triggering a relapse. Erica is intrigued, spotting another man to expose. And did I mention that she offers Luke a blowjob because she likes giving head and is good at it and thinks he needs a release? Flower sees this brash female voice as a vessel for empowerment. If men can be pimps, why can’t women be sluts? There’s a dash of logic there, yet it’s hard to read the message as anything but backwards by the time the movie finally ends.

A tad amateurish visually, Max Winkler’s feature tries to critique culture through the abrasive and reckless carelessness of Harmony Korine’s outstanding 2012 film Spring Breakers and instead stands besides the innocuous and disingenuous 2014 picture Palo Alto from Gia Coppola. Flower shows that Zoey Deutch can imbue even the most offensive characters with her effusive charisma, but like Palo Alto, the movie falls into the listless, boring traps of ennui. If all Winkler sought out to do was offend and disturb, then I think he achieved his goal. But no great film, or any decent one for that matter, would allow the story to end on such a shameless and indecent note as this. As this plastic endeavor suggests, if Erica has changed, if she’s become a flower and has learned a lesson, why has she moved on from her Daddy issues to loving another man behind bars? Maybe because the movie has no idea who she really is. For anyone looking to traverse the tropes of bad independent cinema, watch this movie about a disaffected youth and consider class to be in session. Outside of Deutch, I hated everything else about Flower, one of the few movies that seems proud to be so irredeemable.

“That’s not an effective strategy.”