“No rules this time. I’m turnin’ you loose.”

I’m not sure it’s proper to directly compare the first Sicario film released back in 2015 to this newest installment. They’re too different. The first one definitely had a better script, stronger direction, a fantastic score and one of film history’s greatest cinematographers behind the camera. It’s a better, smarter movie, and a very different beast indeed. Whereas Sicario unfolds with the trained volatility of a veteran police dog, Sicario: Day of the Soldado brings the bite and wildness and the unpredictability of a starving street mutt. This is a dark, grueling, grim film and its rabid nature makes for an unsettling, uneven viewing experience.

Re-teaming to battle against the Mexican drug ring at the border are CIA operative Matt Graver (Josh Brolin) and hitman Alejandro Gillick (Benicio Del Toro). Both men are empty shells, full of shrapnel and just enough humanity, and in this installment they’re tasked with hunting down cartels accused of sending terrorists across the border. A young girl named Isabel Reyes (Isabela Moner), daughter of a drug lord, becomes a pawn in a patrolled game of chess. Sicario 2 does try to draw a fine line of subtlety for its subject matter and themes to carefully dance along in a straight and narrow fashion, yet what makes the film interesting is that the line is always shifting, always malleable and ever-changing, and that the moral code is bound only by individual moments. These two men do horrible things, sometimes in response to horrific actions. They also shows brief glimpses of paternally driven empathy, shielding the innocents from the kind of brutal world they’ve come to accept as normal.

Day of the Soldado is the type of film so consumed by the darkness and the volatility of political gamesmanship that it can become overwhelmingly bleak. But through the two leading men, as well as newcomer Moner (who’s a bright talent in her own right), screenwriter Taylor Sheridan uses this chapter in the saga to investigate the business of domestic terrorism. No person, no country, no agenda in this film is entirely upstanding and morally correct, and it’s completely fascinated by the flawed nature of humanity. It’s more difficult to be brave than it is to be afraid, and Day of the Soldado feeds off of those primitive reactions we have to its fatalistic material. This is not a black and white film by any stretch of the imagination. 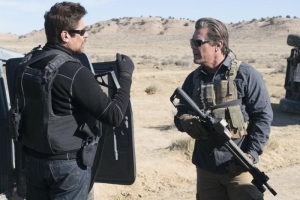 Competently directed – and occasionally engrossing with its creative decisions – by Stefano Sollima, Sicario 2 is yet another showcase for Taylor Sheridan. Sure, the movie may be less layered than the original and far less absorbing, especially with its substitution of a naive moral compass having a rude awakening for one about nurturing innocence. But besides writing believable dialogue, Sheridan knows how to build and structure scenes in ways that are utterly unshakable. Sicario had a few moments I can’t dislodge from my head and, for me, Day of the Soldado has just one. It involves a heartbreaking terrorist attack that completely encapsulates what this small-scale franchise critiques with searing dialogue: our willingness and desire to watch disasters, our detachment from the world around us, and our disillusionment from a hopeful view on humanity that sours with every passing year.

“Your bombs do not terrify us…they empower us.”