“Sending me away for the Summer…what a cliché.

It’s so appropriate for Hot Summer Nights – a personal odyssey fueled by the throes of youthful sexual relationships and the reckless excess of naive drug use – to be a film that never really nails its own style or tone, but to also be a picture that titillates and excites and entertains. It’s an acerbic and biting directorial debut from Elijah Bynum, and although the movie literally looks like it’s been dressed in the stylish hand-me-down clothes of Scorcese’s The Wolf of Wall Street and tempered by the horny vulnerability of Risky Business, the film still manages to repurpose these parts instead of simply reusing them. Hot Summer Nights feels new even though it so obviously isn’t. That’s a skill in and of itself.

Rather than going from West Philly to Bel Air, and never becoming a Prince in the process, Daniel (Timothée Chalamet) makes the short commute to Cape Cod for the Summer. It’s ’91 and this fish out of water is flopping on the decks of social gatherings. The Cape caters to the yuppies who visit during the dog days and allows the local guppies to intermingle with the aristocrats, blending together in a drunken and drug fueled bender that lasts the entire season. Daniel stands on the outside of the party; the film is all over the place from the start, much to its detriment, but a telling scene literally signals his inability to communicate with the wealthy, so he climbs down a rung or two. He’s not from there, nor is he rich, and for this reason he bends at the whim of the local drug dealer. It’s so easy to make dumb decisions when you’re young, blaming them on immaturity, when in reality they’re almost always born out of a desperate earnest to belong. 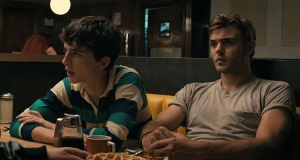 The local weed guy is Hunter Strawberry (Alex Roe), whose name alone foreshadows his primitive sweet tooth for all of the supple things in life. He’s an attractive agent of the provocateur. Locals cops can’t catch him, all the women want him, and he lives life on the edge. Hunter’s relationship with Daniel doesn’t always work; as they begin to sell more and more drugs together, their joint and separate motivations become lost to the beach-side breeze, but we can see that they are using each other and their ill-fated entrepreneurial efforts to fill a void. Daniel has no friends. Hunter’s family has fallen apart. And because it’s Summer, destiny is lit like a bottle rocket, joining Hunter’s smart, seductive sister McKayla (Maika Monroe) with the timid Daniel. In Hot Summer Nights, good things don’t last because we come to learn that the goodness turns sour, and it’s so refreshing to see a film tell a story of young love that’s willing – and also capable – of limiting its hopefulness. Most real fairy tales are intense, short-lived moments of pure and utter rapture that are less interested in happily ever after. Hot Summer Nights appeals to our fleeting, flawed memories. 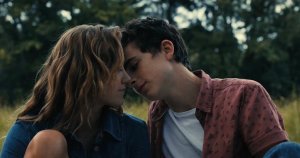 Hot Summer Nights wastes so much of its open by relying on grandiose fisherman style storytelling. It’s marginally effective and infrequently funny, and yet the picture takes a hard turn after the title card finally screams across the screen. Only then does the picture feel real and honest. Chalamet and Monroe exude the kind of intoxicating chemistry that sparks with someone you can’t control; they are tremendous. However, as the film loosens its comedic edge and leans into the dramatics, Alex Roe proves to be the real star of the film. He’s so Brando-esque, a guy with potential who “could’ve been a contender” on this Eastward waterfront but always settles for less. Hot Summer Nights does too much visually and inconsistently warps between dueling tones, but it’s one of the best acted and intriguingly shot films I’ve seen so far this year. It somehow sees the world through the eyes of a kid challenging himself to become a man who’s reborn, conflicted, and complicit in the crimes of aspiration. You’ll leave with an appetite.