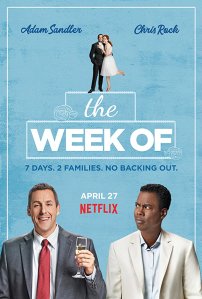 There’s something very clearly awry from the start in The Week Of, and it has less to do with the attempted “disaster piece theater” nature of the script than you might think. The film is just…off. Like a spoiled carton of curdled milk, a black and brown banana, an item where “refrigerate after opening” was ignored and pushed back into the pantry. It’s the type of film that should make its way to the compost pile, and yet Netflix has served this dated sewage to the masses. Surprisingly, the movie is more innocuous than other recent Sandler features on the streaming site; disappointingly, the latest might just also be their most mundane, bland collaboration to date. For a feature length film that’s as empty in flavor and bountiful in product as a health hazardous local buffet, The Week Of offers nothing worth sampling or requesting or recommending. What could’ve been a tolerable and flat and tasteful piece of Matzo becomes a bulldozed pile of dough. 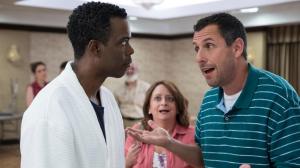 The Week Of operates on the scientific principles of Murphy’s Law, suggesting and showing through goofball antics and half-hearted sentiment that what can go wrong ultimately will go wrong, and it digs itself a ditch so deep and so wide that the side walls can’t be climbed to find the safety nets of intelligence. How do I describe the plot of this film? As the bride Sarah’s (Allison Strong) father, Kenny Lustig (Adam Sandler) is all of the Seven Dwarfs wrapped into one passive-aggressive patriarch, doing his tinniest, best Clark Griswold impression to sell himself as more than a small businessman. Kirby Cordice (Chris Rock) – who’d be Disney’s designated and R-rated Sleazy dwarf – is a surgeon whose wealth exists entirely in his checking account and is absent in his relationships, especially with his son and the groom Tyler (Roland Buck III). 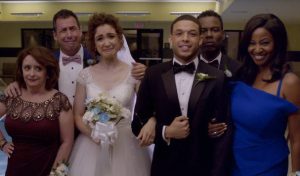 Dramatically dull and painfully unfunny throughout, stretching entire acts without a single quality joke or moment of emotional resonance, The Week Of exists without reason or purpose. The film, despite its counter-productive length, can’t overcome three huge holes. First, the mockumentary shooting style by writer / director Robert Smigel makes zero sense and is smothering to the point that settings become interchangeable, slobbered and spilled upon place mats. The rinse and reuse mentality runs deep here. Secondly, characters exist in a place of arrested development, just without the laughs or the satire or the cringeworthy bitterness of the TV show of the same name. No care and very little thought has gone into the build of these characters. Lastly, the film structures itself in a way where it simply cannot win. Abiding by the standard Holiday format of a week long affair and showing the day-to-day trials of this so-called family, The Week Of becomes a nagging voice begging us to participate in this repetitious chore without the possibility of reaping rewards. This films takes so much more than it gives.

While only slightly better than yet far less insulting compared to The Ridiculous 6 or The Do-Over – two of the absolute worst films I have had the displeasure of watching in recent years – The Week Of offers nothing worth revisiting or embracing either. The unprincipled and monochrome characters act on their own accord, out of touch with the rhythm and rhyme of reality. With movies this inferior and counterproductive, I’ve found that the Netflix formula only makes them feel worse. After nearly 3+ hours of pause and play boredom, I still found myself with another 30 minutes left in the film, and it took a concerted effort to sit through The Week Of’s painfully dumb and fatuous final act. Do yourself a favor a go outside instead. It is Spring after all.