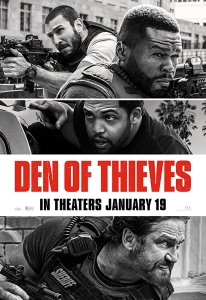 If you love cinema, chances are that you hate the month of January. It’s when studios primarily release the weakest parts of their lineup; the melted blockbusters that never saw the light of Summer, the expired treats never handed out on Halloween, the movies that won’t contend for awards and end up shelved until the New Year. But every now and then a little surprise sneaks its way into theaters nationwide. This year, Den of Thieves is that movie. Sure, it has a few plot holes that spring up here and there, but that’s par the course for the potholes of Winter roads. It’s a B-Movie take on A+ grade material.

Fresh out of prison, Ray Merrimen (Pablo Schreiber), a former Marine, assembles a crew (featuring 50 Cent and Evan Jones) to do the unthinkable: rob the City of Angels’ federal reserve. Outfitted with endless cameras and sensors, the building itself is a vault, a piggy bank palace with strict rules and laws. But Merrimen’s driver Donnie (O’Shea Jackson Jr.) assures us of the old adage that “loose lips sink ships.” Donnie’s a dive bartender, frequented by the bank’s employees, overserving them drinks while secrets are scribbled on bar naps. Their plan is a grungy, gangly, grisly take on Ocean’s 11, brandishing more weapons than sleight of hand tricks to secure their payday. The only hitch in the heist is the involvement of “Big Nick” O’Brien (Gerard Butler), a disgraced drunkard who’s willing to work outside the lines of the law with his fellow street cops. One side wants prosperity; the other wants redemption. Den of Thieves allows its wolves to square off, and surprises with a predictably ingenious story that values those who can outwit opponents over those who simply try to outsmart.

Den of Thieves is a convincing imitation of higher-priced and meaningful goods, hustling its pawned varieties on the black market streets of LA. The uninformed will rejoice at the low-cost and little demand the movie requires, all while those in the know will try to discern the forgery. For me, what makes this sorely overlong (an entire plot line with Nick’s wife should have been edited out altogether) and rather incredulous film work beyond belief is that both opposing factions are given enough material to think themselves to be right. Casual moviegoers will be surprised by the detail; cinephiles will try to surmise events before they even happen and compare the film to its predecessors. Like the stylistic and heavily saturated film Smokin’ Aces, Den of Thieves doesn’t do anything new, nor does it even try, and the result is a potluck affair of all the best dishes we’ve already tasted. They’re inferior, but when plated together they over perform, even making a bit of scatological sense.

Paling in comparison to Heat and ending with a rudimentary twist stolen from The Usual Suspects, Den of Thieves feels a whole lot more like Bad Boys meets Gone in 60 Seconds. This, I think, is the misguided attempt that actually turns into a good thing. Christian Gudegast might not be a great writer, but he can direct discernible action while implementing creative decisions, all while elevating a dense and occasionally dull film into the kind of prized tag sale item that garage sale scavengers would savor in the same way couch potatoes dissolve into their seat cushions during a Sunday afternoon TNT time slot. Sometimes value and convenience are enough to polish a rock into a ruby. Den of Thieves is far from essential viewing, but I found it entertaining, if only because Gerard Butler gets to remind us of his incredible ability to play a straight-faced, crazed, fully-formed lunatic. I’ve rarely been this happily surprised by an over-the-top McGuffin since 2006’s Running Scared.